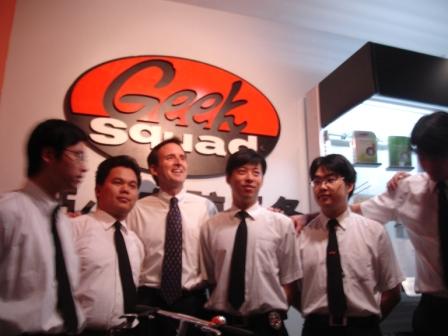 The truth is that Minnesota Governor Tim Pawlenty paid a 36 hour visit to Shanghai late this week, and his sole public appearance was at the Shanghai Best Buy (Best Buy is a Minnesota-based Fortune 100). There, he participated in a grand opening ceremony that included the presentation of US$50,000 worth of computer equipment to a Global Volunteers project in An Shang, Shanxi Province. There were no members of the Minnesota media present for the event, and so far as I can tell, the governor’s China visit received zero coverage in the Minnesota media – outside of a brief slug filled with errors on KARE 11’s website (Ari – is that your photo?). That’s a pity, because the visit included some important meetings with Chinese investors looking at Minnesota as a destination for their cash. If the local media cares, there’s a real story there (perhaps the StarTribune – the state’s largest media organization – could divert some of the resources that it will waste sending reporters to the Olympics to this more consequential story?).

[by the way – I was at Best Buy as member of the media, though I was not covering it as news.]

Finally, I should mention that Governor Pawlenty spent two hours with the Minnesota Club of Shanghai at a club-hosted reception. Though his comments were brief and (presumably) off-record, I think it’s ok to mention that they included a Sven and Ole joke — perhaps the first ever uttered during a public address in China.

[UPDATE 11/6: Three weeks have passed, and nobody at KARE 11 has noticed, much less bothered to correct, the errors in the station’s brief report on Pawlenty’s visit to Shanghai. The most egregious – and dumbest – is in the lede:

Governor Pawlenty took a slight detour on his trade mission to India to stop in China’s Shaanxi Province. That’s where Shanghai is located …

Um, no. Shanghai is roughly 900 miles from Shaanxi. The sing-song certainty of the geographic location (“That’s where Shanghai is located,” exclaimed the bubbly newsreader) makes it funny; the fact that KARE 11 didn’t have a reporter there makes it depressing. What else are they getting totally wrong?]