The January 30 issue of the New Republic includes a short essay on China by Nathan Glazer, one of the great American intellectuals of the last sixty years (really, he is, and deservedly so). It is written on the occasion of Glazer’s first trip to China, and includes his impressions of Shanghai and Beijing. I don’t always agree with him (I definitely don’t agree with naming his article “Shanghai Surprise”), but he’s Nathan Glazer, and I’m not. Still, opinion is one thing, and facts are another, and when it comes to facts – like, what you see when you go to Tiananmen Square – I have to interject. Here, then, is Nathan Glazer on his Beijing:

… I tried in vain to see evidence of the Communist influence. Red flags? We saw some. But they seem to mark banks and other commercial establishments. Red stars? We saw one or two on buildings. Pictures of government leaders, heroes? None. Slogans? When we asked for translations, it seemed they had no political content at all …

Where are the government buildings, I asked, where are the monuments? In Washington, with its grand public buildings and monuments, one cannot be unaware one is in the capital of a great world power. In Beijing, there is only evident the Forbidden City, which once served as the seat of government. The emperors and their attendants lived in those uncomfortable-looking grand pavillions, but there are no government offices there now – only masses of tourists, mostly Chinese (The one portrait of Mao we saw was mounted on one of its huge walls) … the government is not in visual evidence, whether through buildings or monuments or police or military facilities.

Where are the fact-checkers, I ask, where are the foreign affairs editors? And where the !@#$ is this version of Beijing??? I’m not going to pick this apart (I’ll leave that to the Beijing blogs), but I do think its worth pointing out that – while Glazer was looking at that Mao painting pinned to the Forbidden City – his back faced Tiananmen Square, the Great Hall of the People, Mao’s mausoleum, China’s National Flag, the Monument to the Heroes of the Revolution (or whatever they call that thing) and all the police and military his heart could have desired. Below, a satellite image of what Glazer’s back was facing (if one goes by his piece, Glazer stood at the far left of the image): 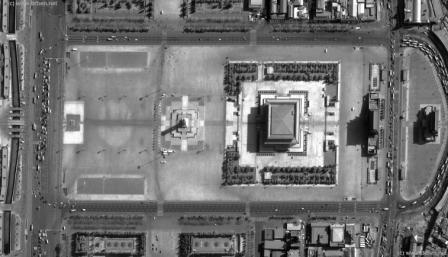 For those who’ve never been to Beijing – imagine staring upwards at Washington D.C.’s Washington Monument, with your back to the Mall and the Capitol, and wondering where all the government buildings and monuments are. It’s pretty much the same thing.