Yesterday UCAN posted an excellent article on what it characterizes as some of the “positive results,” one year on, produced by the Pope’s landmark Letter to Chinese Catholics, released on June 30, 2007. Unlike most reporting on the after-effects of the letter (or, for that matter, Chinese Catholicism), UCAN’s report doesn’t dwell on Vatican-Beijing relations. Instead, it focuses on the letter’s call for reconciliation between China’s “open” and “underground” Catholics and asks whether progress has been made in forging that consensus.

The article offers a tentative yes, and you can read it for yourself, here.

I mention this now because UCAN’s portrait is both subtle and complicated, and very much at odds with the standard, black and white image China’s Catholics typically found in non-Chinese media (most recently propagated by Frontline and Evan Osnos in the flawed documentary, Jesus in China, which I critiqued, at length, here). As I’ve argued in this blog and elsewhere, the mere use of the term “underground” is misleading, as it suggests a community of believers who meet – and exist – in secret. But, in today’s China, nothing could be further from the truth. For various reasons, I’ve been somewhat reluctant to provide specific examples of the overlap in the past, but since UCAN mentions one, I’m going to mention it, too. Referring to the divided Catholics in Tianjin, the story reports:

Teresa, an underground Tianjin Catholic, told UCA News more underground Catholics are attending Masses in Xikai Cathedral at which open-Church priests preside, and fewer are praying at the Marian grotto outside. Previously, they refused to enter the cathedral. 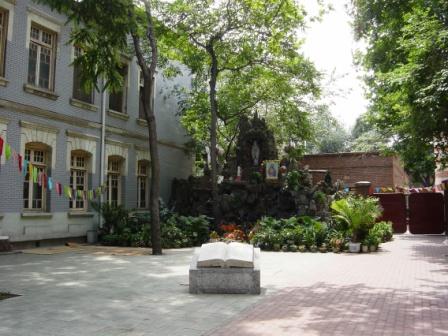 In the image, the diocesan offices (of the “open” church) are in the building to the left (the building to which the grotto is attached). And, to the very far right, is the back corner of the cathedral building. I don’t know how to put this more bluntly: if Tianjin’s underground Catholics were trying to remain “underground,” they couldn’t have chosen a more public place to do it.

Now, I don’t mean to belittle or mock underground Catholics, their sincerity, or their sufferings (past and present). I merely want to point out that the standard view of China’s divided Catholics – underground versus open – is inadequate and misleading. To be sure, there is no question that division exists – but those divisions are rarely a matter of authentic versus inauthentic belief, anymore. In many cases, in fact, they reflect inter-personal divisions formed at much earlier dates, and passed on as a legacy (political, in some cases) of sorts. More on this – at length – in some other forum, at some later date.

[I’ve written this before, but I’ll do it again: UCAN has the best sources and reporting on China’s divided Catholics. Period. And they know how to focus it, too.]