[FINAL UPDATE: Three weeks later and this post is still generating significant traffic. Since then, I’ve written several follow-ups, supplemented with important source documents on this case. Of these, the most crucial are Goldarrow’s legal filing against Ningbo Yibao, the British Foreign Office’s response to the alleged kidnapping, and Ningbo Yibao’s legal response. Finally, as a courtesy, I’d very much appreciate if the journalists who cite these documents mention that they read them at Shanghai Scrap. They cannot be found elsewhere.]

Shanghai Scrap is on book leave until November 1. And after I complete this post, I’m going to hold to that promise.

First, a brief backgrounder and then I’ll get right to the source material.

For a decade, the top US and European export to China, by volume, has been the scrap metal and paper used as a leading raw material in China’s world-beating industrial production. Exact figures don’t exist, but one can safely assume that roughly 30% of the aluminum and copper used in Chinese industrial production is recycled, and that percentage has been growing, continually, fueling ever higher prices for scrap commodities on the world markets. European and American owners of scrap inventories could travel to China and literally audition dozens of potential buyers for their material, each offering better prices and terms. If you were a “foreign supplier” with scrap, the Chinese would buy it, sight unseen, on the assumption relatively safe assumption that the material would increase in value between the port of origin and China.

But in recent weeks that sure bet has become a very, very bad one. Like oil and other commodities, scrap metal and paper prices are in a free fall, and – in some cases – at three year lows. Throughout China, scrap importers are left sitting on inventories purchased at record price levels that will not return this year, or next. Making matters worse, Chinese industrial production has slowed dramatically, leaving the country’s scrap traders with few outlets to unload inventory – even at a steep loss.

The result has been a near total freeze in the scrap trade. A few containers, subject to past contracts, continue to move. But even that trade is threatened: in recent weeks, many Chinese traders have refused to honor contracts signed when prices were high, leaving exporters no choice (in some cases, an extorted “no choice”) but to accept less money – and losses – for material that’s already en route to China. Reportedly, there are unclaimed shipments idling at ports throughout China.

And that’s when the importers are being nice about things.

On Friday, an industry friend forwarded the following memo to me. By mid-afternoon, the memo – and the news contained within it – was ricocheting around the small, very tight-knit world of international scrap traders. I’ll offer a commentary after the second page. For now, keep in mind that Ningbo Yibao Import & Export Co. Ltd is a subsidiary of Zhejiang Arts & Crafts Import & Export Co. Ltd, a major, province-level state-owned enterprise in Zhejiang [click the letter for enlargement]. 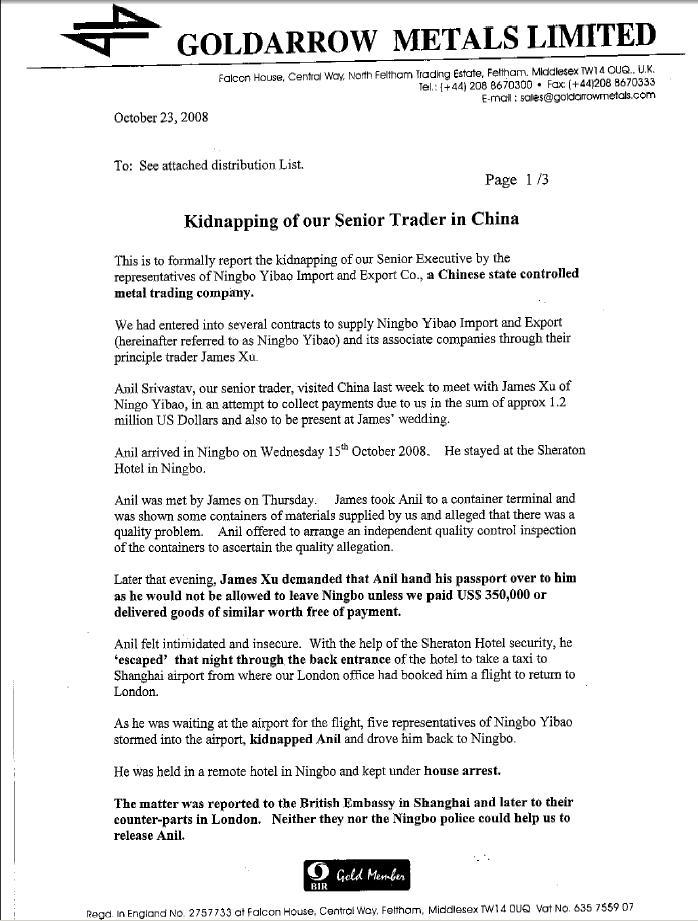 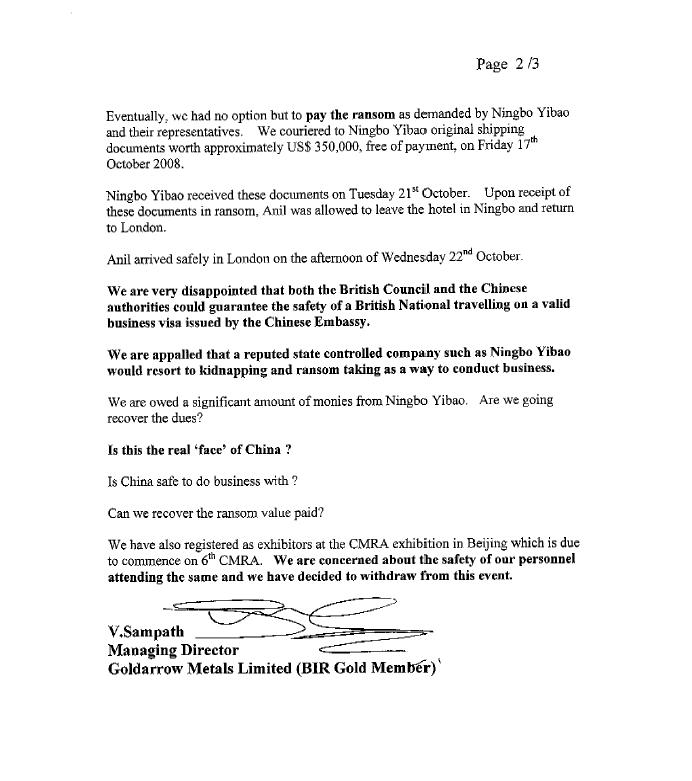 I’ve spokent to two [update: three] individuals close to the Ningbo scrap trade who assure me that the general narrative in the memo is correct. I have attempted to contact Ningbo Yibao, but so far my calls have not been returned. I am awaiting a call-back from the British Foreign Office. I spoke to a representative of Goldarrow this afternoon, and they stand by the account in the letter. When I spoke to Mr. Sampath, the managing director, he added that the alleged kidnapping took place in the check-in area of Pudong Airport at roughly 3 AM.

For now, a couple of additional notes.

First, since the early 1980s, Zhejiang Province has been one of two import bases (southern Guangdong is the other) for China’s non-ferrous scrap metal import industry, and Ningbo has been its most important port. The provincial and local governments have provided consistent, high-level support to the industry, investing in individual companies, and even developing an integrated recycling park – in Ningbo – designed to curb some of the worst environmental abuses associated with the industry.

Second, before the market crash, the Sheraton Ningbo was a hub for the scrap import-export trade. On any given night, there would be – I’m guessing here – half a dozen traders in its rooms.

Third, the last paragraph of the statement references the CMRA Exhibition. This is the annual convention held by the China Nonferrous Metals Industry Association’s Recycling Branch, and is unquestionably the most important scrap metal-related event held in Asia, each year (full disclosure: I was a speaker at the last two exhibitions). Last year’s event drew 1300 participants to Guangzhou, including roughly 300 foreign traders. The market downturn has already, reportedly, impacted attendance; I imagine that this news will negatively impact it even further.

Finally, I wouldn’t want to draw too many conclusions from a single incident, but I will say that the panic (and violence) starting to bubble up through the Chinese scrap markets seems to indicate a much deeper manufacturing recession than what the rather sanguine, China-can-weather-this-storm narrative, has previously provided.

[Update 10/26: The Institute of Scrap Recycling Industries [ISRI], the US-based trade group for the recycling industry, has issued a travel advisory for its members planning to visit international customers. The advisory can be found here.]

[Update 10/27: In response to the ISRI travel advisory, and increasing attention paid to the alleged kidnapping, the Chinese Nonferrous Metals Industry Association Recycling Branch sent the following letter to Robin Weiner, President of ISRI [for the purposes of this post, the relevant paragraph is the second one]:

I noticed an article ISRI Alertâ€”International Business Conditions and Personal Safety while visiting International Customers appeared in ISRI website, which had been forwarded to ISRI members. We fully understand the situation of financial crisis now, some suppliers are suffering loss, some contracts have been cancelled, and price been forced to be discounted. Crisis is hurting Chinese scrap companies too. Most plants were closed down or half closed, others went to bankruptcy with lots of workers lost their jobs. The situation in scrap industry attracted high attention from Chinese government. CMRA is actively arranging a small seminar attended by related government officials and scrap enterprises both china and overseas to find workable solutions during the Beijing forum.

Iâ€™m sorry to say that the â€œkidnappingâ€ mentioned by a UK company is not the fact. The truth is that the suppliers from England miss-loaded scrap copper with aluminum scrap. Then, the representative of supplier came to Ningbo to negotiate their Chinese buyer, and agreement finally reached after long time discussion during which some unpleasant things happened. This is just a single case in trade disputation, so we can not call it â€œkidnappingâ€.

We really hope companies of scrap circle can gather together during our convention in Beijing from Nov.7th -9th and ensuring personal safety. Letâ€™s find a way out together. We are pleased to communicate with ISRI and BIR under the situation of global financial crises, on matters of how to help the scrap import and export enterprises to get over the difficulties and find a good way to solve those trade disputes. We do hope those enterprises both domestic and abroad could contact us directly when confronting with those trade disputes, and we will do our best to assist to find friendly solutions.

Weâ€™ll be much appreciated if you can forward this message to your members to state clearly this matter, and we would like to extend our warm welcome to Mr. Bob Garino of ISRI to deliver a speech on behalf of ISRI.

[UPDATE 10/29: The alleged kidnapper’s response to Gold Arrow may be viewed here.]