While the rest of Shanghai’s media and blogs have been concerned with ethnic uprisings, military parades, and trade wars, Shanghai Scrap has maintained an unwavering focus on the ongoing renovation of his building’s exterior in advance of Expo 2010. As many others have noted, Shanghai is spending an inordinate amount of money to clean-up the city’s thoroughfares and buildings in order to impress the expected flood of Expo 2010 visitors from home and abroad. No doubt, Shanghai Scrap has benefited from the upgrade: as mentioned last week, Shanghai Scrap Tower 1 has been transformed, from a soot-streaked, brown brick  brutalist archetype of sorts, into a happy pastel South Beach symphony – of sorts. But the question remains: who are the workers who have come to Shanghai to do this work?

This afternoon, like most afternoons, an answer appeared dangling by a thick rope outside my window. For the purposes of this post, we’ll call him Mr. Q, and when we met, he was busy painting windows frames that he’d primed earlier in the week.  When I asked if I could take his picture, Mr. Q agreed, so long as the image didn’t capture his face. 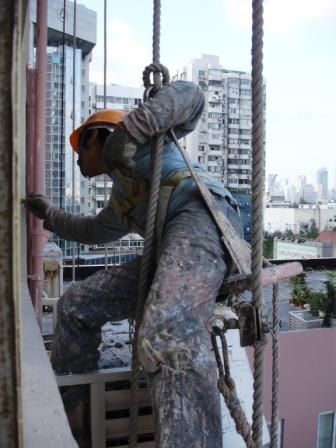 Scrap: How old are you?

Scrap: Where are you from?

Mr. Q: Anhui Province. [ed. note: a relatively poor province directly west of Shanghai, and source of many of the city’s migrant laborers.]

Scrap: When did you move to Shanghai?

Mr. Q: I first came when I was sixteen. I’ve come back many times.

Scrap: What do you do in Anhui?

Mr. Q: My family are farmers. The money is better in Shanghai.

Scrap: Which do you prefer?

Mr. Q: I prefer my home. But Shanghai is interesting. Sometimes we go to watch the weddings over there [he gestured toward the lawn of the hotel around the corner.] I prefer the people in my hometown.

Scrap: How did you get this job?

Mr. Q: My brother told me about it [ed note: ‘brother’ could actually mean his cousin].

Scrap: Does it pay well?

Mr. Q: The money is all the same for these kinds of jobs.

Scrap: What kind of work?

Mr. Q: [points at his harness] This kind of work.

Scrap: Does it pay more because it’s dangerous? 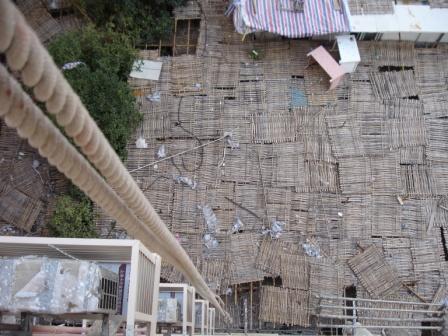 Scrap: Did you know that this building is being improved for the World Expo next year?

Mr. Q: I don’t know much about it. I don’t think that I’ll have the chance to see it.

Mr. Q: I don’t want to pay for a ticket. I’m sure it’s going to be expensive.

Scrap: I could give you a ticket if you’d like one.

Scrap: No? Why not? You could come with me.

Scrap: Where do you live?

Mr. Q: [looks down] I think I need to stop talking. We’re not supposed to bother the people when they’re home.

Scrap: But I’m bothering you.

[Special thanks to M. for helping with this.]