On Friday, I had the pleasure and honor of speaking to a group of MA students in journalism at Fudan University’s School of Journalism in Shanghai. For those who don’t know it – Fudan’s journalism program is the oldest in China (1929, I believe), and also one of its best and most respected. In recent years, as I understand the situation, more and more government money is flowing into Chinese J-schools, including Fudan’s, for – among other reasons – the purpose of preparing a young, well-educated group of foreign correspondents to staff the state-owned media’s planned expansion of its foreign bureaus. So, without further ado, the next generation of Chinese foreign correspondents (click to enlarge): 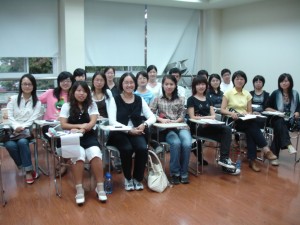 A couple of things to say about this group. First, no doubt about it, they are mostly female. This likely has to do with the fact that selection for this highly competitive program is largely based upon foreign language proficiency (they all read and speak English at a very high level), and – at least among those who apply to get into this program – foreign language proficiency correlates with being female.

Second, based upon my hour with them, and – more important – reports from their regular instructor, my good friend Mara Hvistendahl (a correspondent with the Chronicle of Higher Education, and freelance reporter for a bevy of other publications), they are smart, savvy and curious – good qualities in reporters. I spoke to them about my background and my experiences reporting on China’s recycling trade, and the questions that they posed to me (regarding sourcing, reporting “sensitive” subjects in China, audience) were pertinent and appropriately probing and aggressive. If they’re given the opportunity to do the foreign correspondent’s job in the way that it’s meant to be done, they’ll do just fine out there.

There were some fun moments in the course of that hour, but I think my favorite was the one that proved journalism school – no matter where it’s located – basically comes down to the same question. Toward the end of the session, one of the students raised her hand, glanced at her instructor, and asked something along the lines of: “Do you think it’s necessary that we attend journalism school to become journalists?” I glanced at the instructor – my good friend – and answered: “No, I don’t.” Thus ensued a brief discussion during which it was decided that, though J-school may not do much to develop skills that a journalist should already have (people skills, writing skills), you can’t replaced it for developing connections/guanxi. That is: some things never change – no matter where you go.