If you follow my tweets, you already know about this. But if not, well, here’s the deal. Yesterday, for reasons that I’ll explain in coming days, I stopped into a local Häägen Däzs. While there, I decided to take a photo of the store’s large Christmas tree. As I did so, I was gang-rushed by a rabid employee who succeeded in blocking my shot. Below, the photographic evidence. 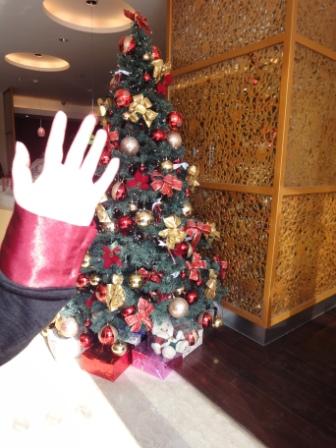 I was asked to leave, and when I argued the point, I was pushed out.

Now, I don’t want to make more of this than really should be made of it. But, I can’t help myself and note that during the several years I’ve covered religion in contemporary China, I’ve never once been gang-rushed out of a church, mosque, or temple for taking a photo. And that raises a question: just what kind of jack-booted thugs have been hired to train/traumatize the beleaguered ice cream workers of Häägen Däzs? Thankfully, I don’t have to worry about it: there’s a Dairy Queen just up the street, and they didn’t argue when I took a picture of their Christmas tree. Let the boycott begin.

[UPDATED 12/24 – Since posting this item, I’ve heard from three people who have been prevented from taking photos in Häägen Däzs by company employees. In all three cases (and the one mentioned in comment #4 below), the individuals were taking photos of friends and family – not Christmas trees. So, on this basis, it appears that Häägen Däzs has a “no photo” policy, and I suspect – in agreement with a couple of the comments below – that they are inordinately concerned about their intellectual property, so much so that they make themselves less appealing to customers.]

[SECOND 12/24 UPDATED: A friend just reminded me of a July 2005 Häägen Däzs in China story that I did. You can read it here, but the relevant fact – for the purpose of this post – is that a Häägen Däzs employee tried to prevent me from taking a photo of a Shanghai store’s exterior. Don’t believe me? Then click the June 23, 2005 image, below, to see the masked ice cream man come chasing out of the store, hands waving. Just what kind of paranoid dictatorship is at work inside that high-end ice cream empire? 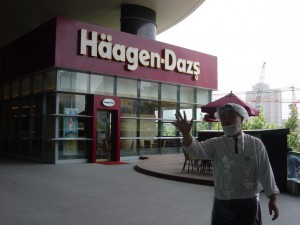