Not long after the 9-11 attacks, Bruce Schneir, a US security expert, coined the term “Security Theater.” The original definition was made in his book, Beyond Fear: Thinking Sensibly about Security in an Uncertain World, but for the purposes of this post, let’s use the definition presented in this easily accessed essay from the New Internationalist:

Security theater refers to security measures that make people feel more secure without doing anything to actually improve their security. An example: the photo ID checks that have sprung up in office buildings. No-one has ever explained why verifying that someone has a photo ID provides any actual security, but it looks like security to have a uniformed guard-for-hire looking at ID cards.

In essence: dumb terrorists will be fooled while everyone else  is inconvenienced. And, it goes without saying, the smart terrorists will find vulnerabilities (for an example of a smart fake terrorist, see Jeffrey Goldberg’s classic debunking of the security at Minneapolis-St. Paul Airport).

Which brings me to the x-ray machines that Shanghai installed in recent months at subway stations across the city (every station I’ve visited, at least) in advance of the massive Expo 2010 (World’s Fair) opening May 1. These have been the subject of much derision from locals and expats (for a contrarian view, see “Confessions of a Shanghai security staffer“), largely due to the fact that they are staffed by teenagers, most of whom appear to be more interested in text messaging and/or checking out the hottie with the fake LV bag. In any case, to my mind, these x-ray machines don’t qualify as “security theater” because they project incompetence, not security. An example: last night, just after 10:00 PM, I entered the People’s Square station. If it’s not Shanghai’s busiest, it’s certainly in the top three, and if you were going to install x-ray machines in only one subway station, that’d be the one. Below, the x-ray machines just outside of a line 1 gate, as I found them last night (ie, switched-off): 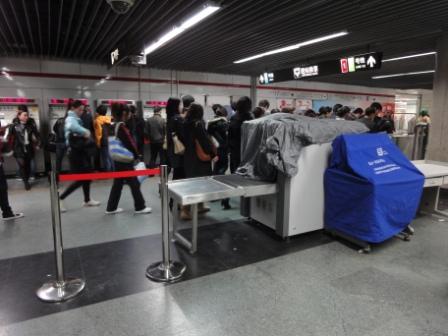 After the jump, the Hengshan Road station, 15 minutes later, as I exited: 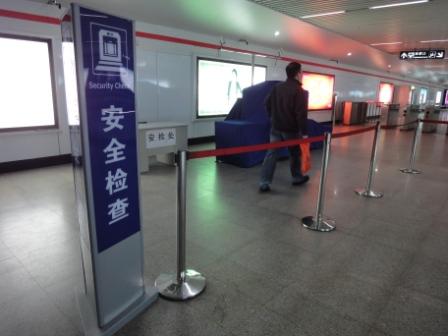 Now it doesn’t take a dumb terrorist to figure out what’s going on in Shanghai’s metro. But let me spell it out: x-ray machine personnel don’t work the late shift (I called a couple of friends who work late – and they tell me they’ve observed the same phenomenon upon leaving work). Which means – and this isn’t a hard deduction – if you want to carry something dangerous onto the Shanghai metro, and you don’t want it x-ray’d, you merely need to wait for rush hour to end.

Obviously, so long as they aren’t run during the evenings, Shanghai’s subway x-ray machines aren’t going to make anyone safer. But I’d like to take this one step further and suggest that Shanghai’s x-ray machines – by conveying the city’s lack of serious security preparations – actually make the subway system and the city less safe. In effect, a smart terrorist will ask: if Shanghai can’t be bothered to staff its x-ray machines in the evenings, then it probably can’t be bothered to properly staff the two levels of Expo site security barriers announced in today’s Shanghai Daily (“Security taking center stage at Shanghai Expo”). Of course, the terrorist might be wrong, and the city might, in fact, do a better job of staffing the barriers than the subways. But I think everybody is safer if the terrorist doesn’t make the deduction at all.

In any case, for the purposes of opening up a discussion, let’s refer to Shanghai’s subway measures as Unsecured Theater, and define the term as:

[UPDATED: An email and a comment, below, have arrived to remind me that James Fallows was all over the Beijing Olympics subway Unsecured beat in 2008 and 2009. Representative posts here and here.]

What I *am* worried about is the guy trying to save eleven RMB by using the subway to transport his containers of highly flammable industrial solvents or his crate of fireworks.

According to the local police, a horrifying number of such cases are thwarted weekly. Even if those official figures are off by a magnitude or two, they are very worrisome.

Imagine the carnage if a rush hour subway carriage was suddenly engulfed in flames, or filled with toxic fumes. We’ve seen the consequences when this happens to a crowded Chinese bus.

If the new screening systems even marginally deter or reduce the chances of such a horror, I say make them permanent, and I will remain happy to toss my bag on the conveyor belt.]