According to my sources, there are over 20,000 fishing tackle shops in China – a commercial phenomenon that defies many foreign stereotypes about China, not least of which is that you can’t find any good fishing in China. Over the next couple of months, and in a few different venues, I’m going to do my best to overturn that stereotype. But, more than that, I hope to show something different, and more positive, as well: that a growing Chinese middle-class, outfitted with spare-time, automobiles, and a desire to get out of the cities, is embracing fishing and other outdoor sports. Regular readers know that I’m loathe to draw sweeping conclusions from limited data, but in the case of fishing in China, I will say this: I’ve never met a fisherman who doesn’t care about blue skies and clean water. From such things, conservation movements have been born.

So how to measure the scale of fishing in China? I am not (yet) ready to give up the location of my favorite Chinese fishing holes. But, as a public service, I am willing to give up the location of the largest fishing tackle hub that I’ve ever encountered outside of the United States (hello, Cabela’s). So: grab yourself a taxi out to Putuo District, and direct the driver to the traffic jammed corner of Jinshajiang and Jingyang roads. There you’ll find a block-long, soot-streaked, pink tile building that – on its first floor – houses more than two dozen fishing tackle shops. 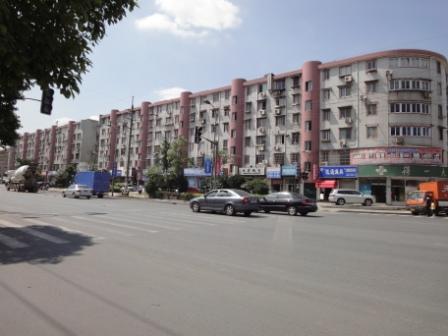 After the page jump, we visit some shops, buy my new/first carp fishing rod, and enjoy a quick chat with the brother/sister team that owns and runs Fengye Fishing Tackle.

First sign that China’s fishing tackle culture doesn’t differ from its counterparts around the world: on Saturday mornings men hang out, drink coffee, and talk fishing – regardless of whether they are buying tackle or fishing that day. I take considerable comfort in that. 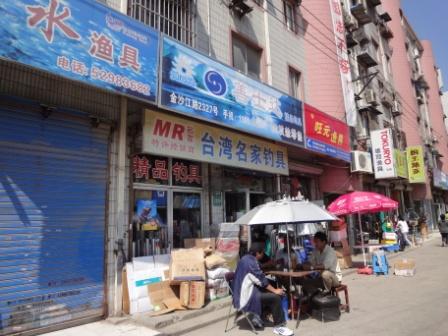 Another sign that everything is normal – the men who hang around the Carp Fishing Mall [my name, not theirs] inevitably are drawn to the biggest and most useless equipment. Case in point: the 10m long, telescoping poles that several dudes managed to talk one shop into letting them take out front (not like you could try them inside). Note, in the photo below, the size of the handles. I held one – it’s heavy. 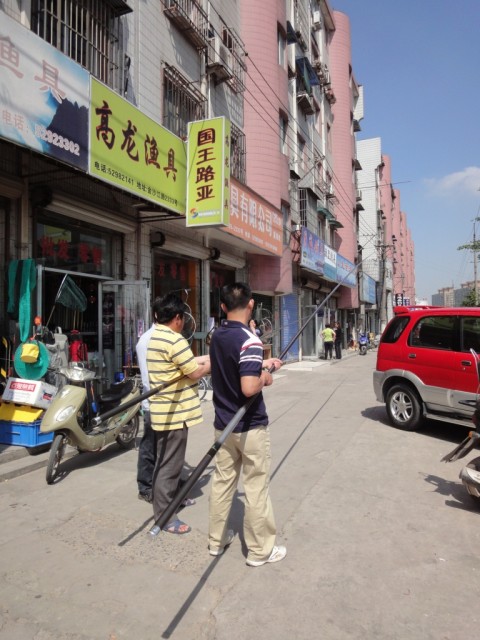 Note that these are neither spin-casting or fly rods, but rather long, very heavy carbon rods to which fishermen basically tie line to the end, and cast into the water in search of giant carp. When the carp hit, the fishermen then, somehow, pull in the fish. When I asked the assembled Saturday morning devotees how big, in fact, are the carp that they catch with such poles, they spread their arms wide. Anyway, in the photo below, note the rod sticking out of the shop, reaching into the power lines. A new mystery of China, if you ask me. 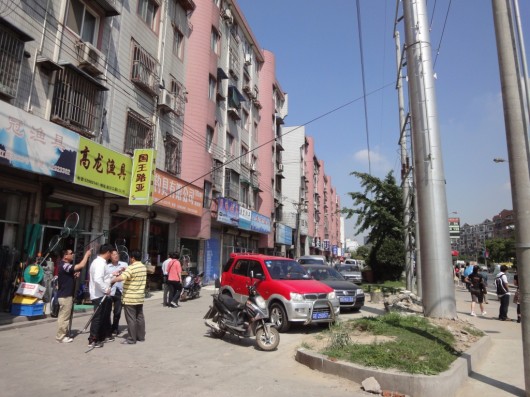 Anyway. I didn’t go down to the carp fishing mall to see weekend warriors play with big rods. I went down there to get outfitted, and in the process I checked out most of the shops. Such as this one. 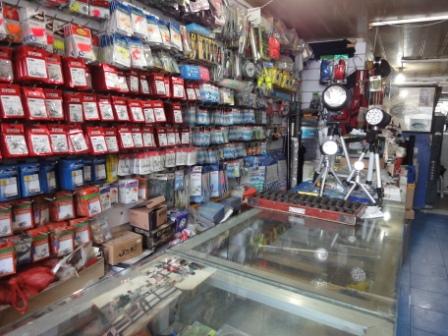 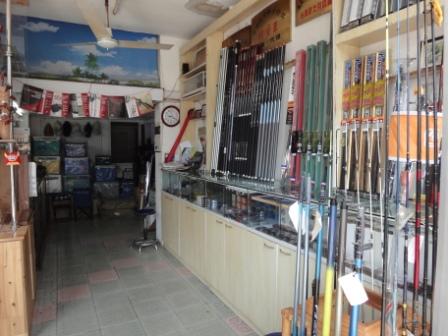 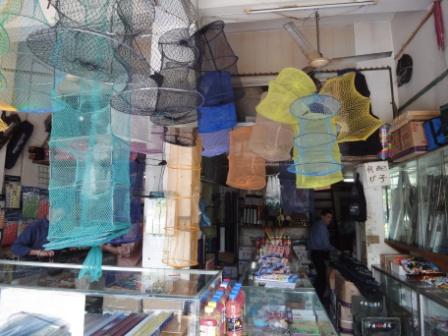 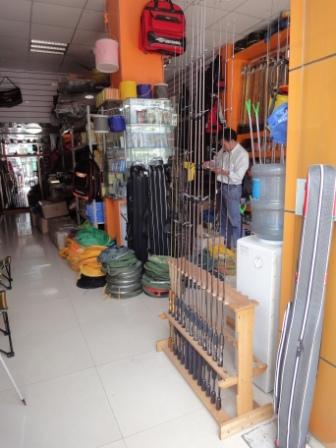 Nonetheless, despite all of the choices, I spent my money at Fengye Fishing Tackle (on the recommendation of a friend), where brother and sister Xuejing and Xuesong Zhao provided me with superb advice and equipment. Here, with the help of a nosy customer, Mr. Zhao picks out my new, 1.8 meter high-carbon, telescoping rod (manufactured by Guangwei). 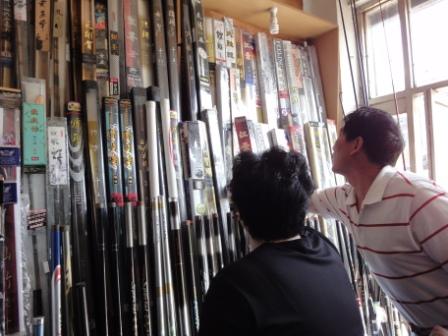 Then he yelled upstairs and a moment later, an elderly gentleman – I think it might’ve been his father – passed it down from the attic. 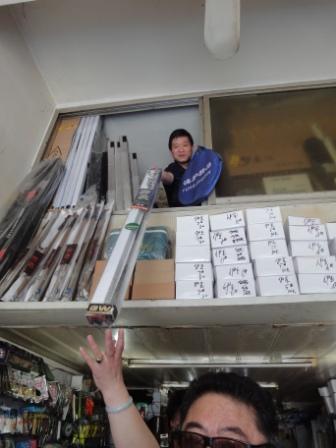 Next, I needed some line. 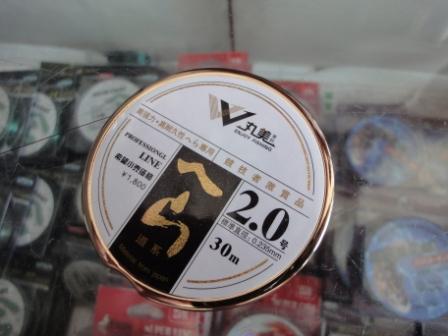 A couple of varieties of hooks: 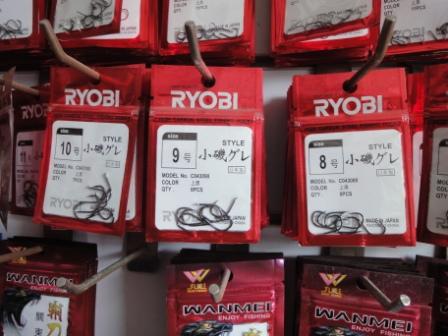 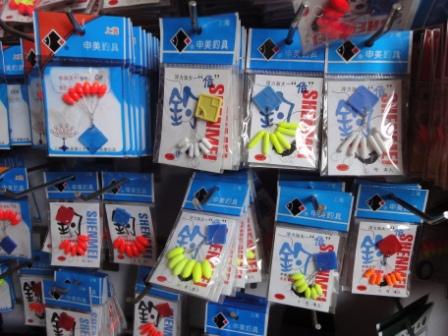 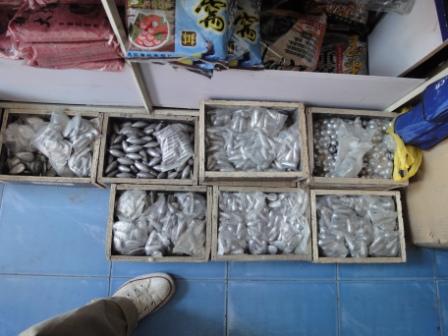 And, key to carp fishing, some quality bobbers. For sale at the Carp Fishing Mall – the Dancing Beauty branded bobber. 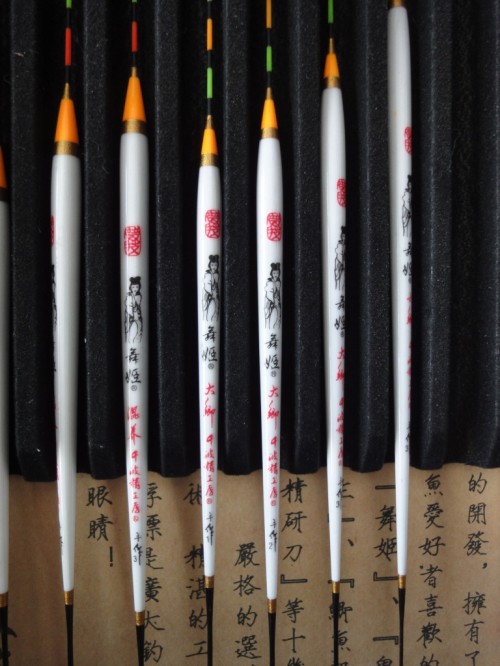 Once I had everything, Mister Zhao proceeded to tie my lines and hooks to Shanghai specifications (half-joking here). This is an elaborate process that – to the inexperienced eye – requires deep knowledge and experience in knot tying, not to mention some knowledge of how carp like to be fished. As it happens, though, Mister Zhao has never fished in his life. Instead, and according to him, he’s learned his craft by watching videos on the internet. When I ask why he’s never actually bothered to fish, Ms. Zhao interjects: “Because I’m afraid that he’d never come back to work.” So, below, Mister Zhao’s supple hands tying my lines: 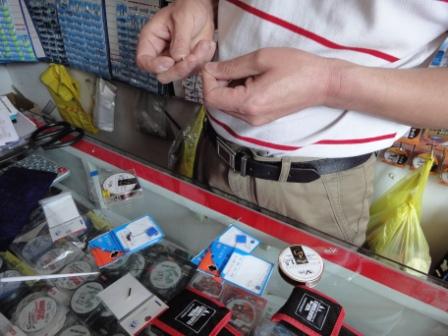 And, Mr. Zhao unpacking my new pole to check that his newly tied lines can be attached to it. 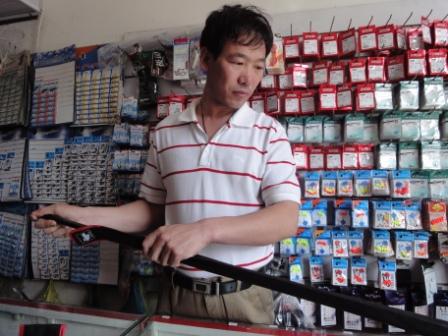 The remains of Mister Zhou’s fine handiwork, after I made a total mess of it out at the carp fishing hole. 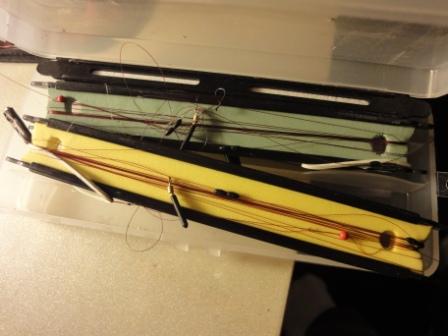 The only thing left to buy was the carp bait, of which there are hundreds of sealed bags lining the walls of Fengye Fishing Tackle. For the most part, it’s corn meal that’s mixed with water until it turns sticky and can be rolled onto a hook. 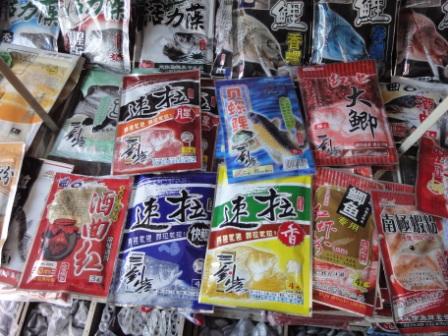 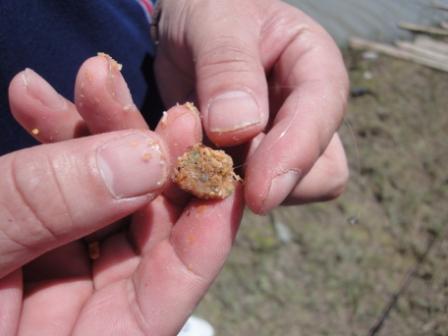 But I digress from the tackle angle. Once I was fully outfitted, I couldn’t help but spend some extra time, poking my head into various shops, seeing what there was to buy. In general, I think, your average North American fisherman – and especially your average European carp fisherman – would more or less feel right at home on Jinshajiang Road. 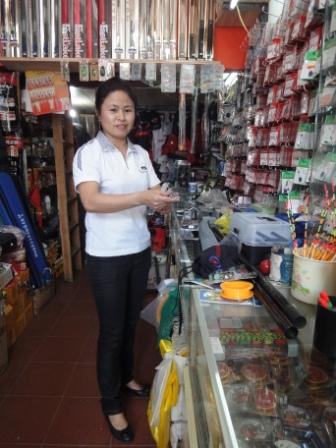 The woman in the photo, above, owns her shop, and she told me that it – like most of the others at the Carp Fishing Mall – have been there for a decade. The fact that they’re all clustered together is an accident – “we do better business if we’re close together.”

Mister Zhou tells me that the real growth in the fishing tackle market has occurred over the last two years, with the majority of his customers being young people – defined as under thirty – who have cars. He also pointed to growth among senior citizens who’ve decided that “fishing is a healthier way to spend their time than playing mahjong.” 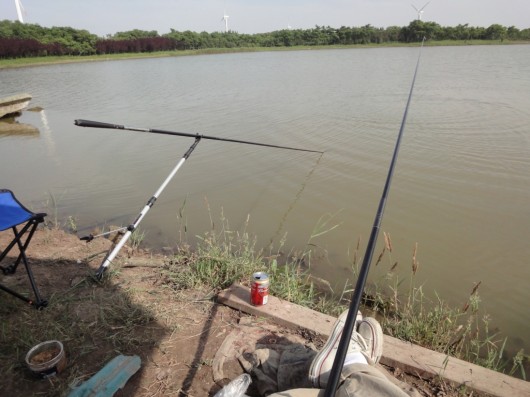 Coming next week — what/how I did with all that carp fishing equipment. Stay tuned …