If one were to make a list of the most memorable essays, reviews, and reports written about Expo 2010 [Shanghai World’s Fair], Shanghai Expo: take a stroll down to Axis of Evil square, the cutting review of the event’s opening day by Malcolm Moore, the Daily Telegraph‘s Shanghai correspondent, would have to be placed near the top. It’s a scathing piece, concise, hilarious, and worth reading if only for Moore’s memorable put-down of the event as “a limp prawn sandwich.”

Still, as an unabashed Expo enthusiast, I did my best to convince Moore that he was getting the Expo story all wrong. I suggested pavilions worth visiting; I recommended restaurants worth trying; I organized an Expo  pub crawl and treated him to two bottles of delicious Moldovan wine. No luck: Moore remained undeterred. And, even worse – from the perspective of someone who thoroughly enjoyed reading Moore’s disdain for the event – he lost interest entirely, and moved onto other stories (along with most of China’s foreign correspondent community).

But surely, Malcolm Moore still has an opinion, and so I reached out to him earlier this week in hope that he’d be up for answering a few last Expo-related question. Malcolm, a gentleman if I ever met one, answered graciously, and at length. Interested readers will note two things: 1) he hasn’t changed his mind at all, and 2) he writes very, very well. 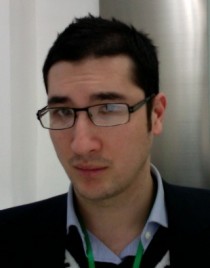 Scrap: On the occasion of the Expo’s opening, you wrote that it as had “all the soul and charm of a limp prawn sandwich.” Six months later, do you stand by this assessment? Or has familiarity suggested another food item to which the Expo might be more accurately compared?

Moore: Yep. Six months later and after a further 15 or 20 or so trips to the site, I stand by my initial assessment.

What they are good at is playing it safe. And the national pavilions on the Pudong side are, almost universally, boring and limp reflections of their home countries, designed not to upset anyone or be controversial in any way.

Worse, it is pretty clear these pavilions were not designed for the Chinese people (some of) who paid to get in and patiently stood in line for hours.

They were designed to impress corporate and government guests, who would only have a cursory glance at the exhibits before being whisked into the VIP suites.

One of the worst offenders, in my opinion, was Canada. You claimed to me that you liked the Canada pavilion. But all I saw was a giant (seriously GIANT) vip suite, a few empty rooms with “sustainability” themes painted on the walls, and three bicycles. They hired Cirque du Soleil to come up with their pavilion and there was still nothing creative in it.

Prawn sandwiches are known in the UK as being the preferred dish at boring corporate events. But actually, it was an unfair analogy. The corporate part of the Expo is the side where you can find some interesting things, although you still have to search fairly hard for it. It was the government part that sucked.

So a better dish to describe the Expo might be a limp pillow bag of salad – officially it is good for you, but you’d rather not eat it (unless your nagging mother forces you to).

Scrap: Limp prawn sandwich or not, do you think the event was worth the money and effort spent on it – both by the Chinese, and the national pavilions? And, perhaps, putting you on the spot a bit here: worth the money spent by the UK?

Moore: It was certainly a waste of money from China’s perspective.

Let’s leave aside the infrastructure improvements in Shanghai, which are fantastic, because I think you can argue that Shanghai might have decided to build those anyway.

If we are talking about building and running the site, the original plans budgeted for 29 billion yuan or so. Of that, 10.9 billion was going to be covered by the government and local banks. The rest was supposed to be part-funded by ticket sales. No one knows how many tickets they gave away free, but I’m willing to speculate it was at least 30pc, and maybe even half. That leaves a pretty big shortfall, which is going to have to come, again, from the local government budget.

Now China is not short of cash, but local governments are finding it relatively difficult to hit their budgets, and I reckon that a chunk of the money they failed to raise will be taken from services elsewhere in the city over the next year. So not only did Shanghai choose to spend 29 billion on a giant boondoggle rather than on healthcare and education, but the choice is likely to have a negative effect on the city’s overall budget.

What did Shanghai get for the Expo? A big bump in tourism, but barely any recognition internationally. The Olympics is a big deal. The Expo is not. And now they are going to tear down all the buildings on the site, so there will be no legacy.

From the UK’s point of view, the jury is still out. The UK was explicit in saying that its target for the Expo was to create an iconic pavilion that would attract businesses to invest in the UK. Until I see the investment stats, I’m going to keep mum.

Scrap: Among organizers and some nat’l pavilions, there’s been considerable frustration that the int’l media, and especially the foreign correspondents, haven’t taken more of an interest in the event – and especially the considerable amount of business being done in the VIP areas (I’ve just spoken to someone involved in a massive mining deal negotiated in a nat’l pavilion). I’ve heard several people call it the biggest and most successful trade fair ever. So, putting this in a way sure to irritate any journalist: how do you respond to those who would say that you’ve just missed a very good story, and possibly a very good beat?

Moore: Well, if there were billion dollar deals being struck in Expo pavilions, then I’m surprised they haven’t announced them.

Certainly I’m curious to know more about this secret deal you mention.

And in terms of being the most successful trade fair ever, well, I’m eager to hear about the volume of business that it generated.

Before the Expo kicked off, the media was certainly excited by it. Almost everyone came to Shanghai and ran stories about the huge infrastructure changes and the ambition and scope of the event. At the Telegraph, we drew up plans for coverage, and specifically coverage of the business side of the Expo. We wanted to interview all the business leaders who were going to come to the event and track what they got out of it.

But when it opened, it became clear pretty quickly that the event was not a success. The pavilions were dull, and UK business leaders (we are a UK paper, after all) didn’t seem to be hugely energised by the possibilities. We spoke to the heads of a few of the large UK companies who came over, and while they all voiced the same platitudes, they hadn’t pulled off any coups.

I don’t think that’s the way business works. The Expo may have been a good place to make introductions to Chinese businesses, and perhaps begin to build relations, but it didn’t generate action – and therefore news – unless you tell me otherwise.

In terms of newspapers and television, there’s only a limited amount of space each day and, to be honest, there were a dozen things that caught the imagination more on any given day than the glad-handing and queues down at the Expo site.

In terms of what it tells us about China, I would say the Expo confirms, once again, that the Communist party will do almost anything not to lose face. That’s also not news.

Scrap: On the flip side – did you sense any interest – any interest at all – in the Expo from Telegraph readers (and editors)? If not, why not?

Moore: No. There was no interest. We had a senior editor come over, but he was pretty bored by it all. It was a distinctly unimaginative, uncreative, uninteresting event. Let’s face it, everyone loves sport, so everyone loves the Olympics. But what excitement was there at the Expo over the six months it ran? I must have asked fifty people who paid for tickets and queued up what their impression of it was, and around 95 per cent of them simply shrugged their shoulders and said it was “alright”.

Moore: Yes. The pub crawl around the Expo that you organised was the only time I had fun on the site. Even if you did make me drink that vile Moldovan wine. 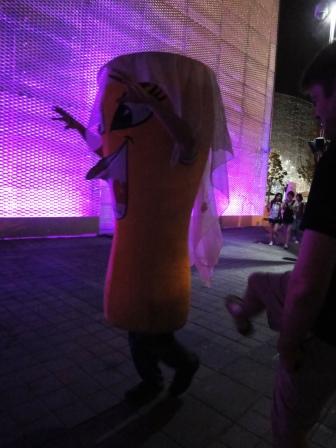 [Above,  Malcolm Moore enjoying the Expo – in a pint of beer costume located outside of the Porterhouse Pub during an Expo pub crawl. All rights reserved.]

Scrap: And finally, were you aware that the Chilean pavilion just placed a 50% discount on every bottle of wine in its shop?

Moore: I take it all back. You want to go to the Expo with me next week?

[ed. note: Demolition of the Expo site begins next week.]