The other day I stopped into one Shanghai’s many Expo merchandise liquidation depots with my old friend, the highly observant Karen McGrane. While I was browsing the keychains, Karen turned to me and said something like, “It says rare earths.” At that, I turned to see Karen holding a small package that contained a mobile phone chain hung with the Expo’s much-reviled mascot, Haibao. Below, the name of the product, and a photo of the complete package. 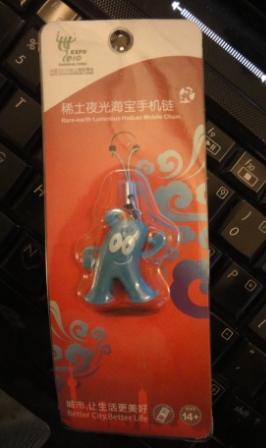 The translation of “rare earth” is accurate, and the manufacturer definitely means it, as the back-side packaging makes clear … after the page jump … 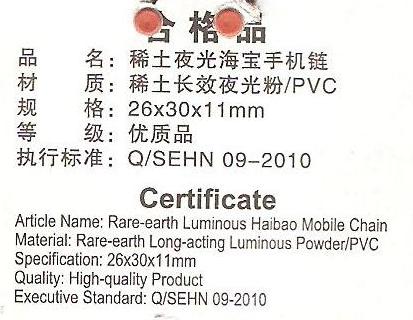 Now, back where I come from, we wouldn’t call that a “rare earth luminous Haibao Mobile Chain,” we’d call it a “GLOW-IN-THE-DARK Haibao Cell Phone Chain.” Emphasis on GLOW-IN-THE-DARK. After all, GLOW-IN-THE-DARK is just so much marketable to the young people likely to buy such a chain than “rare earth.” But that’s what’s so interesting about this unexpected product: the manufacturer either believes that the term “rare earth” has cachet with potential customers, or he’s hoping to create some cachet (calling all youth marketing consultants).

Last month the Chinese government either did or did not restrict the export of rare earth elements to Japan and other countries (Jen Ambrose has done two useful round-ups of Rare Earth Mania reading, here and here). One of the lesser reported aspects of the rare earth mania story in China is the country’s concerted effort, via official trade associations, to market itself as a place to manufacture with rare earths. That’s the good cop side of the story; the trade embargo (if it happened) is the dark side. Now, I have no idea whether or not the Haibao mobile phone chain has anything to do with that. But what I do know is that merchandising licenses and agreements for the Expo were finalized long before Expo 2010’s May 1 opening – which was, let’s face it, five months before Rare Earth Mania. And that means that at least one Chinese manufacturer (the manufacturer of the chain is based in Shanghai) was thinking about marketing rare earths as useless consumer products six months before most of the developed world woke up to its shortage of these supposedly essential elements. Draw your own conclusions. 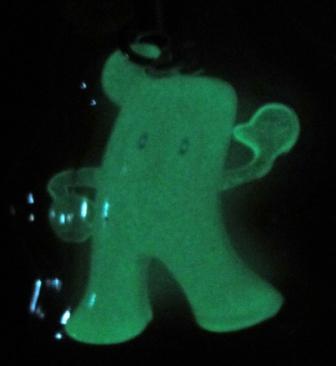 [A personal note: Over the last two weeks I’ve told several friends that I’ve absolutely positively sworn off further Expo blogging. I believe that this post – concerned, as it is, with rare earths – conforms with the spirit of that promise.]