Let’s call this a lesson in avoiding absolutes.

Below, two versions of a component in every hard disk drive. The circled components – the valuable, important components – are magnets of the (capital R, capital E) Rare Earth variety. That is to say, they are magnets manufactured, in part, by adding a dash of the mysterious elements that my colleagues in the media have rendered quasi-mystical, and the Chinese have rendered more valuable via (reportedly, export bans). I show them, in part, to clear up the mystery. So here, dear readers, circled in red, are examples of the rare earth actuator magnets present in pretty much every hard drive on the planet (stay in your seats, please). 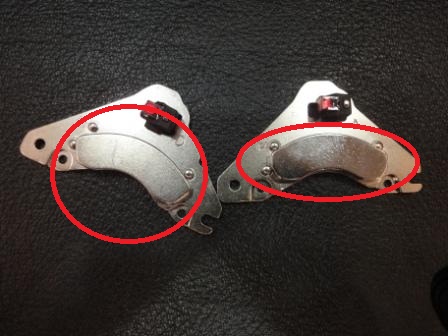 I bring them up, also, because, based upon some of the things that have been written about rare earths over the last few months, one might have the impression that the recycling and recovery of rare earths – in part to deal with Chinese export restrictions – is something that requires high-tech. But, of course, based upon the above photo, you can pretty much judge for yourself: the only technology necessary to recover the rare earth magnets in a hard drive (how many hundreds of millions?) is a screw-driver. And that’s precisely how it’s done in one part of Malaysia, where this photo was taken: workers disassemble hard drives, pull out the magnets, and return them to the manufacturers. And the workers do this for roughly US$300/month – a more than sufficient living wage in that region (but not, I’ll admit, for someone who eats organic in San Francisco).

Now, one might assume, with the US Congress holding hearings on rare earth shortages, that Americans and Japanese, too, are taking out their screwdrivers so as to extract, and then return these precious rare earth magnets to manufacturers. But such as assumption would be decidedly incorrect – in large part, because, even though the magnets are relatively valuable, they’re not so valuable as to justify American salaries to remove them with screw drivers. So, as a result, Americans – and other developed economies – recycle hard drives and their electronics in shredders, like this one (a New York Times photo by Maxine Hicks): 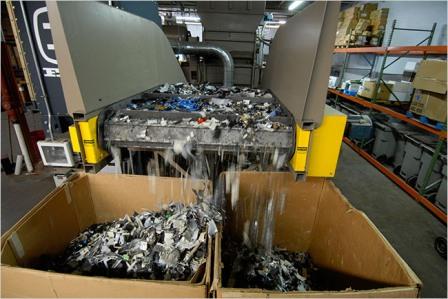 Yes, the process is as dumb and wasteful as it looks: hard-drives are shredded – rare earth magnets and all – and then run through various mechanical separators that are indisputably less effective than humans in recovering the various materials that constitute electronics. But one thing is certain: the separators attached to American electronics shredders aren’t capable of recovering rare earths. Those materials are lost, melted away, or landfilled. In other words: this process encourages more environmentally-destructive, and unsafe, rare earth mining.

The frustrating irony, though, is that there’s nothing magical about recovering rare earths from a hard drive. You need only export those hard drives to a place where mechanical dis-assembly is cheap enough to be profitable – that is, worth it for somebody to buy some screw-drivers and set up a business.

I bring this rather complicated, and somewhat blog-unworthy argument to my readers for two reasons: a) it’s on my mind this last week, and b) it goes very much against the mainstream liberal groupthink about electronics recycling in the United States: namely, it’s bad and environmentally unfriendly to export your electronics to low-wage countries. You’ll get no argument from me that electronic waste exports can, in fact, be very bad for human health and the environment; but the absolutist case against such exports – propounded by advocacy groups and most of the global media – obscures the collateral environmental and human damage done by “recycling” those materials in the developed world (every rare earth magnet not recovered at a US electronics shredder is a rare earth magnet that must be mined in China). If you can extract more recyclable material from a hard drive in Malaysia, and do it safely, why on Earth would you argue that it should remain in the United States? But that’s precisely the argument that’s been made, with little counter-point, in the American media for more than a decade. It’s time to start thinking a bit more expansively, with a screw-driver in hand.