During the run-up to the November 12 release of my first book, Junkyard Planet: Travels in the Billion Dollar Trash Trade, I’m posting photos taken during my decade of reporting on the global waste, recycling, refurbishment, and repair trade. Today’s Scene shows what many people in China (including a ranking government official whom I met today) characterize as “foreign trash” and many people outside of China characterize as “dumped” waste. Click to enlarge. 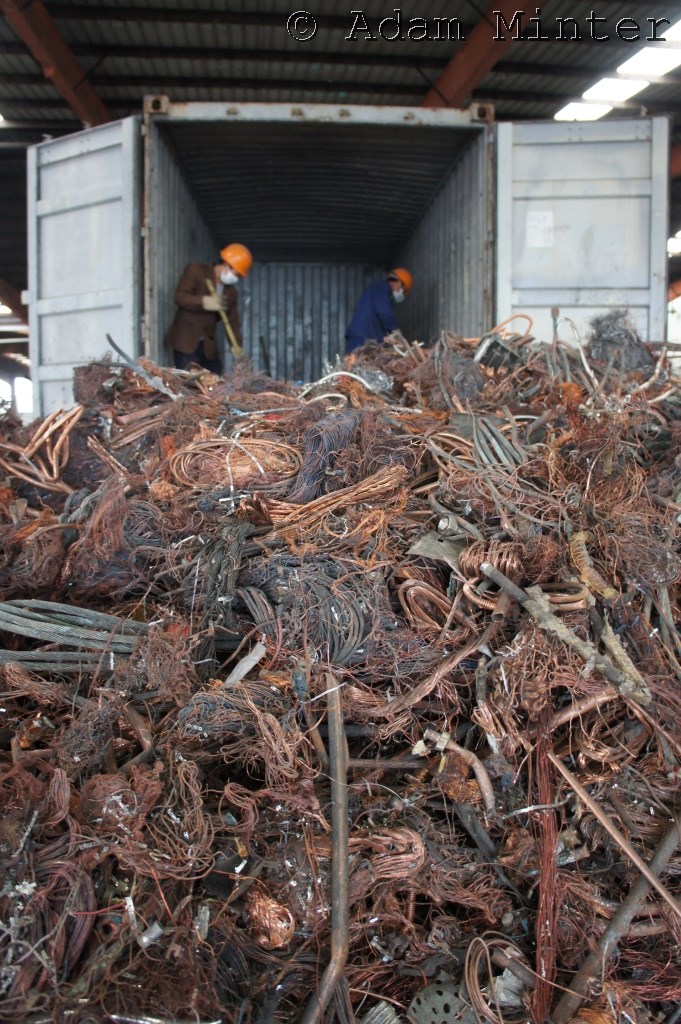 To be precise, the image, taken two weeks ago at a scrap metal warehouse in Ningbo, China, shows scrap copper wire and tubing freshly unloaded from a shipping container that just arrived from the United States. I am talking about the copper pipe that used to send water flowing through your bathroom; the old telephone wire that once carried the voice of your best friend. Is it trash? This afternoon, in pursuit of an answer to this question I showed the photo to two scrap dealer friends of mine, and asked for a price. The consensus was that it’s worth around $3/lb at current market prices (for the professional scrapper crowd: minus twenty to twenty-five off the COMEX). Now consider the fact that there was 40,000 lb of this stuff in the container. That is to say, somebody sent roughly $120,000 worth of “foreign trash” to China. Of course, it’s entirely possible that somebody, somewhere in America, is willing to dump $120,000 worth of trash on China without any thought of being paid for it; but I’ve yet to find that person. Indeed, according to data from China Customs that I received this afternoon, between January and September of this year, China imported 3.19 mmt of copper scrap worth $10 billion (the US was the leading exporter). Much of it looked like this – that is, it looked like foreign trash being dumped in Ningbo, China. But, of course, it wasn’t trash. It was something much more valuable that – if one can get past how it looks – makes the world a cleaner, greener place.