This afternoon I spent some time working on details for what’s going to be the second leg of a Junkyard Planet tour that’ll lead me to the UK. And that got me wondering if it’s going to be anything like the first leg.

The thing is, before this all started, I sort of knew what was to come. Only I didn’t! Of the many surprises on the road, perhaps the most unexpected was the endless, relentless search for telephone land lines from which I could do radio interviews (and I have done a LOT of radio interviews).

Here’s the deal: radio programmers hate cell phones. As we all know, they tend to break up, fade out, or outright cut out at the worst times. So, if a programmer is going to book a guest, they’ll usually require the guest to book a land line. In an age where many of us are dropping our land lines, entirely, this can be difficult. And if you’re an author on tour, traveling between locations, this can occasionally turn into a crisis. Take, for example, the photo, below. It was taken somewhere in the Midwest, at a hotel that I had thought I was booked for. Turns out that I had booked it … for a week in the future. Worse yet, I arrived five minutes before a radio interview that was supposed to patch into my (non-existent) room. Thankfully, a desk clerk took pity and let me do the twenty minute interview on the house phone, while seated in the only spare chair available – a wheelchair. My wife captured the moment. 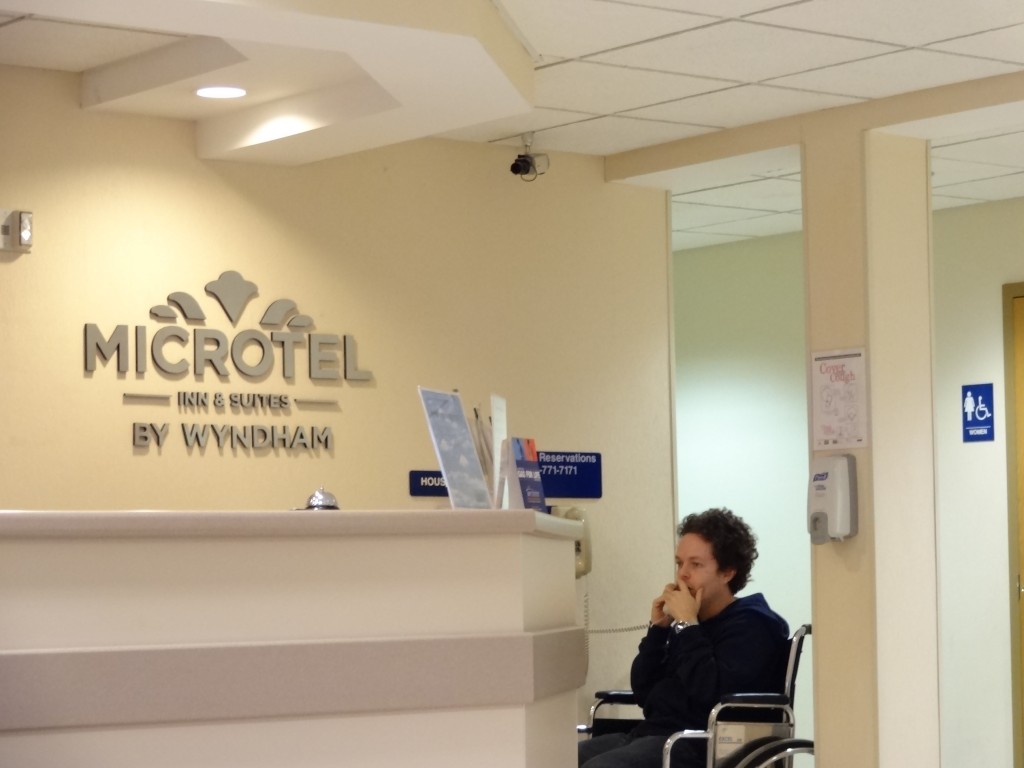 The glamour of a book tour.

Of course, it wasn’t all chaos. Mostly, it was maximum fun that ran as smooth as a well-planned road trip (which it was, in many respects).

So: thanks to everyone who came to the book talks. For me, some of the most enjoyable moments involved getting to meet people who’ve been reading Shanghai Scrap over the years, following me on twitter, or keeping up with my Bloomberg work. As a writer, it’s one thing to know that people are reading, but it’s something altogether different, and better, to know the people who are reading. I’m so grateful to have had that chance over the last few weeks, and I’m looking forward to having more chances as we near the 16 January UK release and a book tour that’ll me around London, Singapore, Malaysia, and then back to China (details, as they become available, here).

In the meantime, there’s lots of new media related to Junkyard Planet (and much more to come). A few highlights:

That last radio appearance is one of my favorites from the last month, in no small part because it sent Junkyard Planet up the best seller rankings in Canada. In fact, as I write this, Junkyard Planet is sitting in the Top 50 at Indigo (next to authors like Stephen King [!] and Donna Tartt [!]), Canada’s leading book retailer, and is back-ordered at Amazon Canada. Thank you, Canada! At least for now, the book is available at both sites for an astonishingly low CDN$13.74 for the hardcover on Indigo, and CDN$11.09 for the Kindle edition. Those are the lowest prices I’ve seen anywhere (and they’ll last so long as Junkyard Planet is in Indigo’s Top 50), so if you’re in Canada, and looking for a trashy holiday gift for that grubber in your life, this is the moment.

Happy holidays to the readers of Shanghai Scrap, and many thanks for helping to make November and December 2013 so unforgettable for me and my family.