I’m in Tianjin this week, attending a conference that I’ll be writing about soon. Like most Chinese trade conferences attended by government officials, this one is a very long snooze: speeches and presentations are submitted and vetted in advance, bound in a book, and distributed to conference participants who have very little incentive to attend the actual presentations, but instead spend their time networking outside of the hall. But for experienced conference attendees (say, me), the long snooze poses its own challenges, precisely because attendees with something worthwhile to say will often leave it out of the submitted version of their remarks, and instead insert it into their actual presentations. Thus, unlike most conference attendees, I sit and wait for these moments.

Anyway, perhaps my most treasured moment of this conference was backhanded. Late yesterday afternoon, Professor Lu Zhongwu of China’s Northeastern University stepped up to the podium. As he prepared his Powerpoint, he was introduced by Wei Jiahong, Specialized Vice-chair of the China National Resources Recycling Association. “Professor Lu is an expert in his field,” Wei noted. “And though he is eighty years old, he is still lively and energetic.”

So far as I could tell, Professor Lu took this without a flinch. 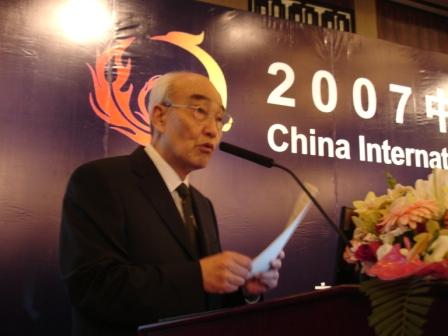 It didn’t stop there. After his 30 minute presentation, Lu returned to his seat of honor at the front of the conference hall. As he sat, Wei asked him to stand, and encouraged the audience to wish him “many more years of life.” In response, Lu clasped his hands together and shook them over his head, Olympic champion style.