I was in a gift shop in Ho Chi Minh City’s Tan Son Nhat International Airport, looking for something – anything – to take with me as a souvenir of my nearly two weeks in Vietnam (on assignment). The bottles of Vietnamese liquers stuffed with cobras were interesting; the T-shirts were nice; the pointy hats were promising. But then, in the back of the shop, I came across this: 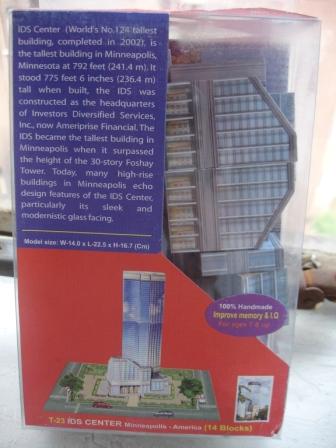 That’s right – a Vietnamese-manufactured “wooden magnet puzzle” of the IDS Center in Minneapolis. For those not from the Upper Midwest, the IDS is the tallest building in downtown Minneapolis (what’s that I hear? A thousand web-surfers suddenly clicking elsewhere?). It’s also a beloved icon. For those of us who grow up in the Twin Cities, a visit to the IDS Center was a childhood event.

So of course I spent the roughly $5 and bought the puzzle.

I’ll admit, I was expecting disappointment, and the box practically promised it: 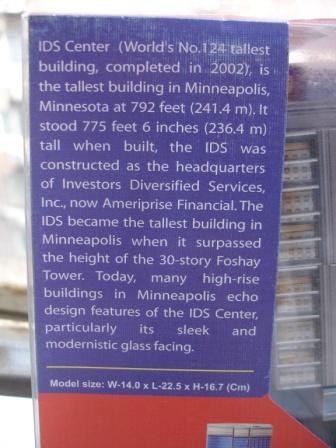 Actually, the IDS was completed in 1974, a fact that I learned from the lengthy Wikipedia entry on the IDS that the box label totally cribs – except for the date of completion.

Then again, who expects accuracy when we’re dealing with the world’s 124th tallest building?

While on the topic of shame-worthy, I should mention that it took me a good ten minutes to figure out how to put the thing together. The results are in the image below. 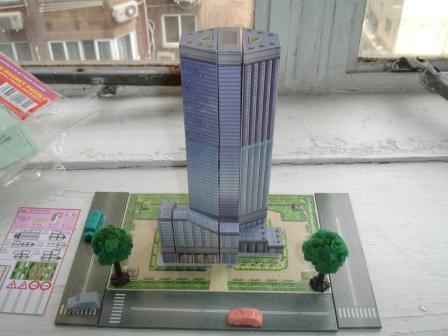 I realize that the photo doesn’t exactly lend the impression that this was a difficult assembly task. But in my defense, I’ll point out that the puzzle doesn’t exactly resemble the IDS as Philip Johnson envisioned it. The Crystal Court, in particular, is a lame approximation of the building’s best feature.

On the other hand, the fantasy park and two fake trees that ring the puzzle IDS – though a total fiction – are a fine suggestion for a downtown in need of some open space.