Since 2004, the highest levels of the Chinese government have emphasized the need for China to develop something called a Circular Economy. Like many passive observers of China’s environmental policies, I assumed that the term was really just a poor translation for sustainable development. How wrong I was.

On Wednesday, I attended a speech delivered by Feng Zhijun, Vice-chair of the Environmental and Resources Committe of the National People’s Congress, and – according to him, at least – the person in charge of coordinating the landmark circular economy legislation set to be released later this year (according to Feng – “I am the coordinator because I cannot be criticized.”). Feng’s speech, delivered to roughly 500 Chinese and foreign attendees of a recycling conference in Tianjin, was unusual. Half-way through it, he observed that there were many journalists present, and thus asked that his comments on the legislation not be attributed to him. That’s an absolute first in my book: requesting background from an audience of hundreds … half-way through a speech.

“I don’t care if a child pees. The question is – how am I going to use a napkin to clean up when the child pees?” 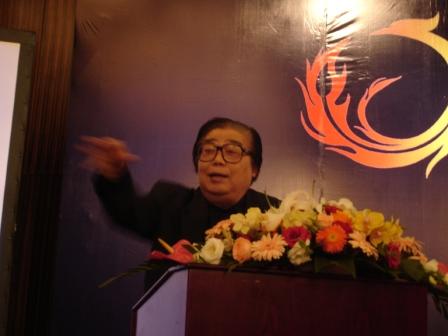 [apologies for the poor photo – I was busy taking notes!]

I think it was apparent to everyone in the room that this is a guy who doesnâ€™t have many people telling him what he can and cannot say. That noted â€“ I sort of get what he means here, and itâ€™s an awfully practical approach to the rather intractable problem of how China can improve the living standards of its people without permanently damaging its environment – especially when cheap, effective, and polluting means are ready available.

Using Fengâ€™s language (and the â€œbackgroundâ€ section of his speech) â€“ the Circular Economy law seems to be primarily concerned with finding a better way to wipe up. Foreign governments and environmentalists hoping for a total restructuring of the Chinese economy â€“ despite Chinaâ€™s massive coal and other mineral reserves â€“ are going to be disappointed:

â€œA foreign environmental leader came to me, said â€˜you shouldnâ€™t develop polluting power plants.â€™ But China has to live! If China slows, we will have problems.â€

Among those problems, obviously, is social unrest caused by stagnating growth and living standards, and the CCP has long made it clear that it wonâ€™t tolerate that, under any circumstance. However, I think it’s simplistic and unfair to suggest that senior Chinese officials are concerned about the environment only insofar as it is an issue that threatens their power.

Earlier in his speech, for example, Feng noted the great gap between Chinaâ€™s laudable environmental laws and their pitiable enforcement:â€œWe visited scrap factories, and they all use waste treatment facilities. But after we leave,they shut them down. Last year we visited factories in nine provinces in the Yellow River region, and all have waste water treatment plants. But after we leave, they release the waste water into the Yellow River.â€

Obviously, he’s concerned that federal power isn’t being respected. But I don’t think it’s a stretch to think that he’s intrinsically concerned with the situation in the Yellow River, too.