Earlier this week AsiaNews reported that the government of Henan Province has decreed the destruction (by dynamite!) of a well-known Marian shrine near Anyang. According to the article, upwards of 40,000 people visit the shrine during an annual pilgrimage that is scheduled for July 16. The shrine itself was built 1903-1905, and was nearly destroyed during World War II and the Cultural Revolution. Finally, the shrine is presumably licensed for use by the “open” Church; according to the AsiaNews article, on May 14 Anyang revoked the permit for both the shrine and the 2007 pilgrimage.

This story is beginning to ricochet around the blogosphere, with some commentators erroneously ascribing the action to the “Chinese government” (notably, Amy Welborn’s really excellent blog). Though it may seem like a subtle point, the “Chinese government” – insofar as that means a federal entity in Beijing – has nothing to do with this situation (if the AsiaNews article is to be believed). Instead, the local government of Henan Province – and, it seems, Henan’s governor himself – are behind it:

In the meantime, since the end of May a “working group” from the local government has installed itself in Tianjiajing. According to some suppositions, the local government move requisitioning the lands and abolishing the pilgrimage is due to the geographical position of the Church, on the summit, above a valley ideal for the building of a hotel or perhaps country villa of some Party member.

In other words, the local government’s motive for destroying the shrine likely has very little to do with religion or the suppression of it – and everything to do with greed and real estate. However, the fact that the shrine and church need to be registered with the local religious affairs authorities provides the rapacious individuals who want the property with the perfect means of seizing it. In effect, by rendering the property illegal, they can take it.

This is not a new or uncommon story in China. Media, Western and Chinese, have been reporting on illegal land grabs by property developers in collusion with local government for several years now. Nor is this the first instance in which Church property has been appropriated illegally by land developers. In November 2005, 16 nuns in Xi’an were beaten by thugs presumably hired by a property developer with eyes on property occupied by a Catholic school building.

The issue of Church property in China is a complicated one. During the Cultural Revolution, Church properties (and those of other religions) were appropriated by the Chinese government and converted into other uses, including government offices and factories. For example, Shanghai’s St. Ignatius Cathedral was converted into a grain warehouse. Below, a photo of the cathedral’s apse taken during the Cultural Revolution [and thanks to Fr. Tom Lucas, S.J., of the University of San Francisco, for the image]: 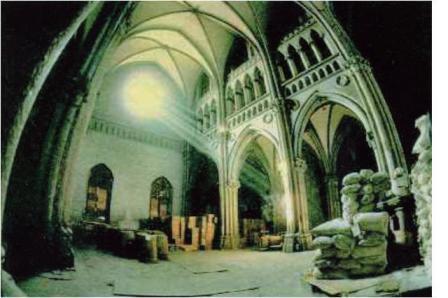 During the late 1970s, as China began to allow limited religious expression, China’s State Council took an interest in insulating China’s Catholic and Protestant organizations from foreign influence. One way of doing this, the State Council determined, was through the return of Church properties seized over the prior twenty years. That way, China’s religious could then generate money from their real estate and not have to depend upon foreigners. On July 16, 1980, the State Council issued “Document 188: Concerning the Real Estate of Religious Bodies.” The introduction included this highly illuminating paragraph:

The implementation of a policy on real estate of religious organizations is helpful to the carrying out of the principles of independence and autonomy of the Catholic and the Protestant Churches in our country. It is also helpful in the fight against the infiltration of foreign religious powers, and is also an appropriate means to solve the problem of self-support of religious organizations and the financial needs of religious personnel. Therefore, this task should be dealt with from a political perspective, and be treated as a special issue.

It is unclear whether Document 188 is still relevant. It may have been superseded by other State Council directives. But what is important to note is that – for various reasons – high-ranking officials in Beijing wanted Church property returned and respected. As with most matters of law in China, the degree to which the decree was followed varied by local government. For example, in Shanghai the local government has generally respected Church property, and most Church property has either been returned to the diocese or compensation has been arranged. But that is not the case in all dioceses.

In either case, it is worth noting that the Catholic community in Henan is not without recourse in the matter of their Marian shrine. An interesting paragraph from the AsiaNews story – that was left mostly unexplained – hints at alternatives:

“It’s unbelievable that they have done this “, one faithful tells AsiaNews. “These local communist leaders don’t even know the central governments laws governing religious polices, they only create useless and dangerous tension”. “We will never give in “says another faithful. “We are not afraid and we will defend our legitimate rights to the very end”.

How will they defend their rights? Well, as ridiculous as it may sound, litigation might be a legitimate option. In a recent column, Nicholas Kristof of the New York Times described how an underground Protestant in Shandong Province successfully sued a local police department after being arrested for running an unregistered house church [subscriber only]. Meanwhile, property owners throughout China (not counting religious ones) are learning how to successfully protect themselves from illegal appropriation by developers and local governments. In this case, like so many not related to religious property, the ability to turn back the developers will be very much limited by the location of the action and, I suspect, whether or not Beijing wants to step into the situation.