Both did pass the exam and enrolled in universities – but that was 30 years ago, when the admission tests resumed after more than a decade’s gap because of the “cultural revolution” (1966-76).

Interesting, obviously, because the state-owned English-language paper is once again placing scare quotes around references to the Cultural Revolution. This is not new; it’s been going on for at least as long as I’ve been in China. Understanding why is not difficult, though hardly understandable: the Cultural Revolution, or the cultural revolution, or the “cultural revolution” is not exactly a period of Chinese history that the authorities are interested in highlighting. Then again, it’s awfully hard to pretend that something didn’t happen between 1966 and 1976.

Anyway, it’d been a while since I’d seen a reference like this, and it suddenly struck me as odd. What, precisely, is meant by “cultural revolution”?

According to the Chicago Manual of Style Online, quotes around a term – commonly known as scare quotes – have this usage:

Quotation marks are often used to alert readers that a term is used in a nonstandard, ironic, or other special sense.

Unfortunately, this offers little guidance on how to understand the China Daily usage. The paper is not being ironic, and it is hardly trying to be non-standard (because, presumably, the standard usage is the one to avoid). As for a “special sense” – what could it possibly be?

The definition at answers.com is superficially more helpful:

Either of a pair of quotation marks used to emphasize a word or phrase or to indicate its special status, especially to express doubt about its validity or to criticize its use.

The China Daily story is not trying to doubt the validity of the term’s usage; the whole point of that sentence is to suggest that something did happen between 1966 to 1976. So, assuming China Daily actually considered this issue carefully, the only possible reason for the scare quotes is to criticize the use of the term. Which is weird. In a different world or China, I’d send a letter to the editor inquiring as to what term the editors at China Daily prefer to small-c cultural revolution. For now, I’ll chalk it up to one more instance of a rapidly evolving Communist Party attempting – with all of its heart – to deal with the legacy of its past. An unenviable task. 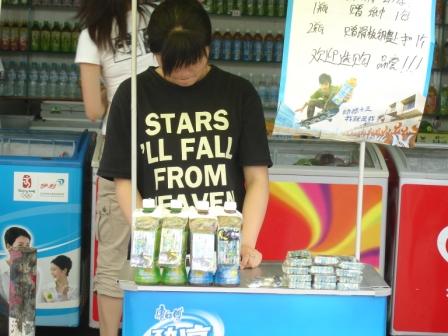