Over the last three decades, China has positioned itself as a world economic leader. Investment analysts recommend the country as an excellent place for foreign investors. They are absolutely right! We do have a wonderful opportunity to invest in Chinaâ€”with Godâ€™s Word. Through our contacts, the Lord has provided the names of thousands of people who could profit eternally from receiving a copy of the New Testament in their own language. Participate in this â€œinvestment projectâ€ through sending New Testaments and your prayers, â€œso that the one who sows and the one who reaps may rejoice together.â€ (John 4:36)

Another part of the Bibles Unbound targets the China-North Korean border region. In this case:

Our friends in the underground Chinese church have carefully and painstakingly assembled mailing lists of Chinese-Koreans in the area who are thought to be at least somewhat open to evangelism.

[It would be interesting to hear how those involuntarily receiving Bibles with US postmarks – via China Post! – in one of the most politically sensitive regions of China, feel about Bibles Unbound.]

According to the “How it Works” section of the Bibles Unbound website, copies of the New Testament are available from the program for US$6, with a minimum purchase of 5 (for US$30). Once the order is placed, Bibles Unbound will send out the texts, along with postage, packaging and mailing labels, to the person who ordered them. That person is then expected to package the books and then send them to a re-mailing center in the US, which “will handle transport of the New Testaments to their final destination.” According to the website, 22,975 New Testaments have been sent to China in this manner. At US$6 per copy, that works out to US$137,850.

With that in mind, a few relevant facts about Bible publication and availability in China.

In November, 2006, I interviewed Kua Wee Seng of United Bible Societies [UBS] in Singapore. UBS is a non-denominational organization based in London that supports Bible translation and publication worldwide. Kua Wee Seng has worked with the organization since 1993, and he is now in charge of its Chinese translation and publication operations. According to him, UBS has printed more than 43 million Chinese-language Bibles in China since 1987. Of those, 3 million were actually exported outside of China (is Bibles Unbound buying those New Testaments?). Most of UBSâ€™s printing activities are at the Amity Press, in Nanjing. During the early years of UBSâ€™s Amity partnership, they printed 1 million Chinese language Bibles, annually; today they print 3.4 million, annually. â€œAccording to a number of knowledgeable sources,â€ Kua told me. â€œThe Bible is the best-selling book in China.â€ The primary market, UBS has learned, is young people, and the most popular edition is a pocket one.

It is worth noting, too, that Amity is not the only Bible publisher in China. The Guanxi Press, owned by the Shanghai Catholic diocese, has printed well over 1 million copies of Bishop Aloysius Jin Luxianâ€™s translation of the New Testament over the last two decades (below, a photo of that translation) with support of UBS. 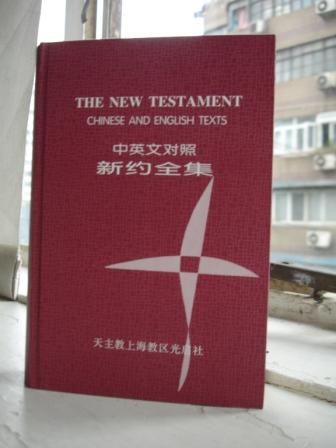 So â€“ what exactly is Bibles Unbound trying to accomplish? I suppose it is possible that its â€œcontactsâ€ in China are merely providing it with lists of people too poor to afford their own Bibles. Fair enough, though one would hope that it is only sending Bibles to those people who actually want them. But if the goal is to provide Bibles to the poor, why not maximize the $30 contribution and send those Bibles from China directly (in cooperation with UBS and Amity, say) â€“ and not from a US shipping center to someoneâ€™s living room in, for example, Kansas City, and then to a remailing center? Chinese translations of the New Testament are readily available – in China – for less than US$3, in my experience, and probably even cheaper.

Alternatively, Bibles Unbound might be concerned that providing Bibles to underground Christians in China – in person – would place both the donor and receiver at risk. But then, does the organization really believe that nobody at China Post will notice when a poor Christian villager in the backwaters of Shanxi Province suddenly receives a package from the United States (presumably, with a customs slip claiming a US$6 “book” inside)? I suppose, in that case at least, the only person placed at risk is the villager. Meanwhile, back home in the developed world, the donor can login to the Bibles Unbound operation map, where crosses (no irony, no kidding) show Bible delivery locations.

In my recent interview with Abigail Cutler of the Atlantic Monthly, I briefly touch on the mis-perceptions that many Americans and Europeans have about the open and underground Catholic Church in China. Though I have very limited experience and knowledge of the Chinese Protestant Church (all Protestant denominations were combined into a single Protestant church entity in the 1950s), it is no stretch to say that the same mis-perceptions apply to it, as well. Anyway, as I mentioned to Cutler, those mis-perceptions are partly the result of advocacy by foreign groups that – for whatever reason – have insisted upon perpetuating an image of Chinese Christianity that is fixed in the 1970s.

I donâ€™t want to doubt the good intentions of Bibles Unbound. And I certainly donâ€™t want to suggest that I am oblivious to the difficulties faced by unregistered Christians in China. But I would like to suggest that missionary organizations like Bibles Unbound should attempt to confront the real issues of religious freedom in China (such as access to quality religious education, preservation of religious properties, and the need to work with local government officials often hostile to religion) â€“ and not false ones, like access to Bibles. At the very least, emphasizing such bogus issues serves to further twist the already distorted view of Chinese Christian life held by most Americans (presumably the target audience for the fundraising appeal of Bibles Unbound). If Chinese Christians need anything, itâ€™s a sincere and truthful understanding of their current situation from overseas Christians who purport to be their friends.

[***June 14 update from Hanoi*** I didn’t view the preposterous Bibles Unbound Movie until I received an email notifying me of its existence. It’s worth watching – especially the section around 1:30 – as a perfect example of how overseas organizations distort the actual situation with Christians in China for ends that I’ll let them explain. As you watch it, please keep in mind that there are no restrictions on the printing or distribution of Bibles in China, and that 43 million Bibles have been printed there over the last two decades. If Bibles Unbound was really concerned with spreading the Gospel, wouldn’t it just commit the hundreds of thousands of dollars it raises to distributing the Bibles within China, from Chinese Bibles publishers like Amity in Beijing – instead of sending them from America? And just what will China Post employees think about those odd white envelopes with American postmarks addressed to people who never receive overseas mail?]