Regular readers of this blog might recall the revelation – made in late February – that bureaucrats in Shanghai’s Putuo District had drawn up strict, confidential guidelines (later denied, unsuccessfully) requiring that strict ratios (Golden Ratios, actually) between, say, the length of the nose and the width of the mouth, be applied during the rigorous selection process for the city’s forty-some Olympic hostesses. Then, as now, I view the whole debacle as an interesting indicator of the perfectionist pressures that Chinese civil servants at all levels feel as the Olympic approach, and the absurd – occasionally offensive – lengths to which they will go to meet them.

Which brings us to Qingdao, and training sessions for that fair city’s contingent of female, teenage Olympic volunteers. No word yet on whether the famed Golden Ratio was applied to their selection, too. But fear not: Qingdao’s Olympic bureaucrats have weird fetishes of their own. Specifically: “Big smiles with six to eight teeth showing and 45 degree handshakes.” Just how serious is Qingdao about achieving these results? Enough to jam sticks between the teeth of the teenagers until they get the damned smile right, that’s how serious: 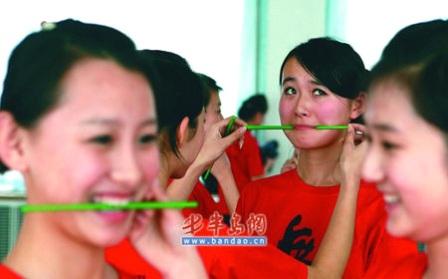 And just in case you forgot who’s responsible for this stunt, let Xinhua remind you:

The lovely volunteers’ difficult training is taking place in Qingdao, the eastern Chinese host city for the sailing events.