I’m just back from an interesting couple of days in Wuxi, and I promise to resume substantive blogging over the weekend. In the meantime, though, a photo of a building that Wuxi’s locals (especially local government officials) like to call the “White House.” They also like to ask visiting Americans (at least, this visiting American) whether they agree that it looks like the White House. 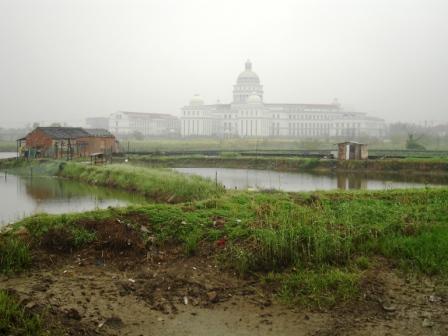 In the foreground is one of the several fish farms that cover dozens of (undeveloped) acres behind the White House. It is unlikely to remain for long, though. The White House is the heart of a high-tech development zone (it houses software firms, not government officials), and just next door is a CD-manufacturing facility.

[UPDATE: Yes, I’m aware it resembles the US Capitol building more than the White House. And, yes, I tried to explain that.]

[UPDATE 4/24: Danwei’s Front Page of the Day has an interesting post on another Chinese “White House” that looks like the US Capitol. In comment #8, below, Wang explains: “I was a little bit intrigued until I realized that in China, the executive branch is everything, and the legislative body, the Peopleâ€™s Congress, is all but a decoration. And Chinese people know this. No one, I think, will admit that their latest and greatest development project looks like the American version of the Chinese rubber stamp, which is much, much less impressive.” Take a look at the full comment below.]