Frankly, after getting drenched in the swirling downpour that followed Thursday’s Olympic sailing in Qingdao, I declared my Olympics to be officially over (still drying out). No more deadlines, no more tickets. I’ll likely have something to say as a wrap-up in the next few days, but otherwise, I’m moving on. And moving onto a favorite topic, at that. Over the last three years I’ve written several articles on the important and ongoing restoration of the stained glass windows in Shanghai’s St. Ignatius Cathedral (an extended treatment, here; the last few paragraphs, here). The originals were destroyed during the Cultural Revolution; the new ones are being designed by Wo Ye, a Beijing-born artist trained in traditional Chinese painting, and at the Vatican’s liturgical art school in Milan. In designing them, Wo Ye is purposely using Chinese motifs and designs in pursuit of a distinctly Chinese version of this most Western of arts. The project is roughly 20% complete, and this afternoon I was given the distinct privilege of seeing what will account for the next 15%. A few images … 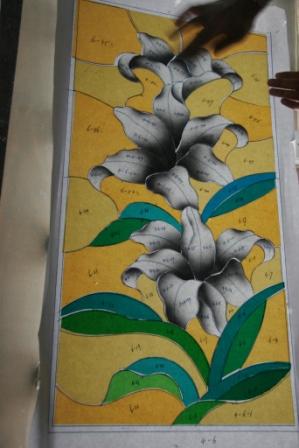 For those not familiar with Chinese painting – and watercolor, in particular – this lily (and those flowers which will accompany it) is almost certainly the first expression of that ancient tradition in stained glass. I’ve tried to express before, and will again, that this is not only an important piece of ongoing liturgical art, but an important ongoing project in Chinese art, period. Anyway, the panel measures roughly 1 meter x .3 meter, and will be installed in a frame 20 meters above the cathedral floor, where it will become a part of a series of windows that depict a garden of paradise, with Chinese characteristics (bamboo, lilies, magnolias). More images after the jump … Below, a magnolia panel that will be installed in the same window bank as the lily. 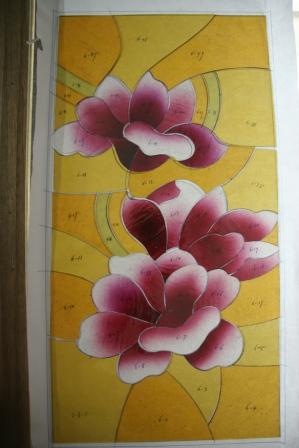 The “watery” effect in both flowers – that is, the progressive shading – is accomplished by airbrushing the glass with a paint designed for ceramics, and then firing the pieces in a kiln. I’ll have more to say about this in a different forum, but for now suffice to say that this is more art than science, and many pieces of glass have been sacrificed in the pursuit of this effect/technique.

Below, a close-up of a magnolia bud, not yet bloomed, and the careful coloring that’s been applied to the glass. 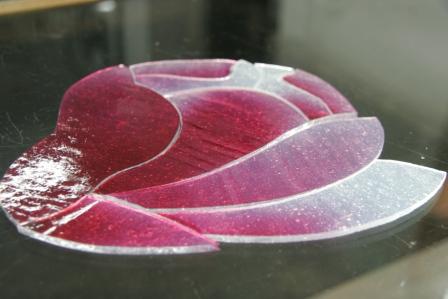 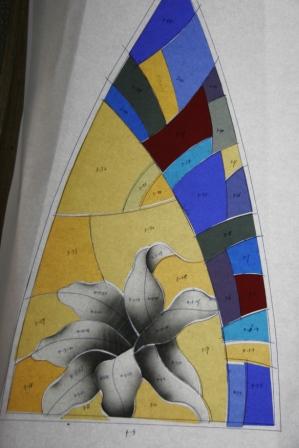 And a close-up of the shaded glass … 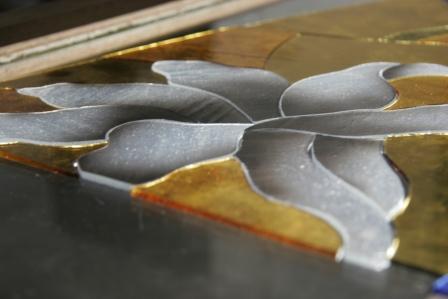 For context purposes, the new windows will line the nave, complementing a series of bamboo windows in the transept and apse. See below: 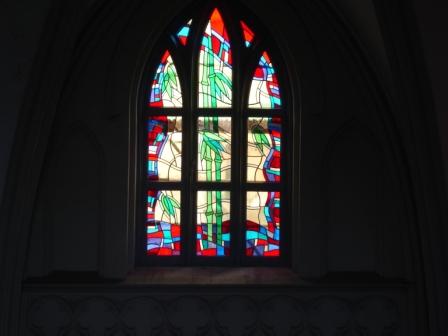 Above, and below, the total height of the windows is roughly 3m. 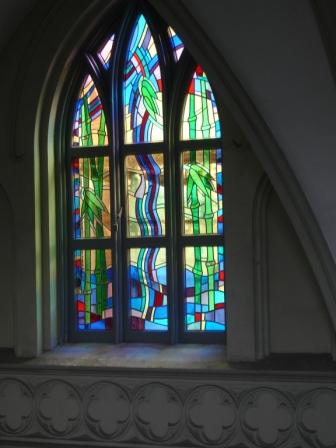 [UPDATE: Micah Sittig has some nice images of the first level nave chapels on flickr. Have a look at them here.]