As noted in previous posts, Haibao, the Gumby-like mascot for World Expo 2010, has, in the wake of the Olympics, infiltrated Shanghai. Writing from the perspective of Shanghai Scrap HQ: he is on the banners that hang from the lampposts on my street; he is on posters in the subway station downstairs; and he is depicted in a needlessly massive sculpture in the nearby park where I like to walk. But, at least before today, he had not invaded my home.

Alas, all good things come to an end.

This afternoon I found this Haibao-themed postcard in my mailbox (a brief inquiry revealed that I am not the only person in my building to receive one): 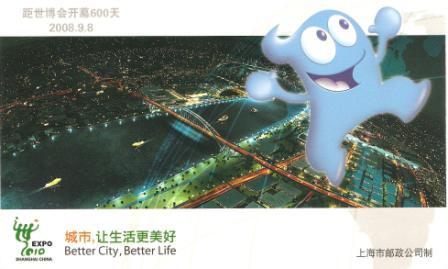 Shanghai mail is often late, and this card – which commemorates the “600 Days Until” date on 9 September – is no exception. I admit to flinching when I saw Haibao prancing across my power bill. Is nothing sacred? In the years running up to the Olympics, did Beijing residents open their mailboxes to find Fuwa postcards? I think not.

In somewhat related Expo news: according to an acquaintance well-connected with Shanghai’s education bureaucracy, city officials are currently looking for opinions on how to teach English to the city’s 20 million residents before the Expo. “The idea is to show that Shanghai is a world class city,” explained this person.

Anyway, for the record, the back of the postcard features an image of the Expo 2010 China Pavilion (which we, at Shanghai Scrap HQ, like very much): 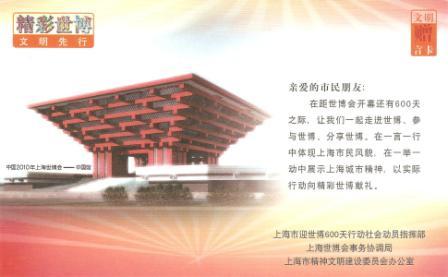 [Personal note: Last week I swore off additional Haibao posts. But this evening I had dinner with a friend who I hadn’t seen in quite some time, and her enthusiasm for the Haibao posts left me no choice: more Haibao!]