Compared to the last bird flu scare, China seems to be taking the current, unsettling spate of bird flu fatalities with unlikely aplomb. Consider: in January, there were five Chinese deaths from the feared pathogen; for the whole of 2008, there were only three. Perhaps the relative ambivalence is related to the fact that the pathogen is emerging during Spring Festival, when attentions are elsewhere.

But if China is taking the emergence in stride, others may not be. On Wednesday I spent two hours at Tokyo Narita Airport, a major air hub and transfer point for flights throughout Asia. And, while there, I saw something that I hadn’t seen since the 2003 SARS outbreak: passengers, and air industry employees, wearing surgical masks in hope of warding off airborne pathogens. A couple of notable cases: a Northwest Airlines boarding agent was wearing a mask while scanning the tickets of boarding passengers (what a way to greet them); on my flights in and out of Narita, a handful of passengers were wearing masks. 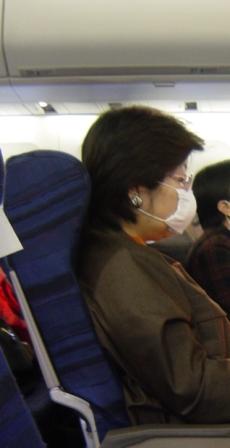 To be fair, I have absolutely no idea if the masks were related to bird flu, specifically, or were just a protective measure (and not a particularly effective one) to protect against winter colds. Also, the number of people wearing masks on Wednesday – maybe one in fifty – doesn’t come close to the numbers in 2003, when half had them. But I’ve been flying in and out of Narita a few times per year, for years, and I can’t recall another instance of mask wearing since SARS.

[Professional Note: In November 2002, two months before the international media found the SARS story, I visited Guangzhou for the first time, and was struck by the large number of people walking around the city in surgical masks. When I asked the person I was visiting, a source, for the reason, he told me that “Guangzhou has a particularly bad flu this year.” I had no reason to think otherwise, and let it go. But ever since, I’ve been sensitive to mass mask wearing.]

[UPDATE: A friend writes to point out that “[S]urgical masks are just as effective as magic amulaets at stopping viral particles. That’s why Northwest should prohibit its employees from wearing both and scaring the passengers.” An excellent point. And since we’re on the topic of Northwest Airlines, I should probably mention that Wednesday’s edition of Flight 1451 was delayed for just over two hours because the airline couldn’t find a flight crew to pilot it. That, according to the flight attendants who kept the stranded passengers informed during the delay.]