This evening I had dinner with an old friend, and afterwards we decided to take a walk into the old Ruijin Guest House grounds. As I detail in an earlier post, the Ruijin Guest House is a state-owned hotel and restaurant complex covering nearly 100 bucolic acres in the heart of Shanghai. At least, that was the state of things until late last year, and the decision to redevelop the complex’s rolling green lawns into a “modern” high-rise hotel complex. In any case, we decided to overlook the construction and get a look at what remains of the old grounds and buildings. Near the gate on Maoming Road, we came across this exquiste window, hand-painted and fired in the 1920s. I’ve seen it many times before, in daylight, but it was only tonight, with the light shining behind it, that I really appreciated its beauty and craftsmanship: 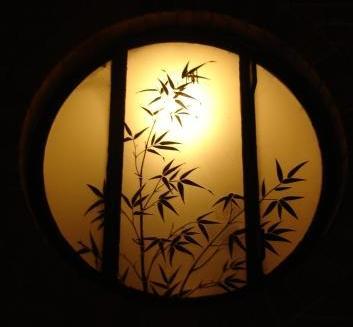 On the opposite side of the same building that houses this modest little window is a much larger, multi-panel art deco stained glass window depicting a leopard in a tropical forest. Some – including the Shanghai government – claim that the leopard window is the oldest stained glass window in Shanghai. Oldest surviving might be more accurate, due to the fact that most of Shanghai’s stained glass, pre-1965, was destroyed during the Cultural Revolution. In any case, this bamboo window (a worthy precursor to more recent bamboo windows in Xujiahui), have a common lineage: the Toushanwan Orphanage (or, in Shanghainese, T’ou-Sè-Wè – meaning, I’m told, “Mud Hills at River Bend”).Little known today, at one time Tousanwan Orphange was internationally known for the quality of its artistic handicrafts, and its religious handicrafts, including paintings and stained glass, were found in churches throughout China, but especially in Shanghai.  Founded by the Shanghai Catholic diocese in 1855, Toushanwan was originally located in Qingpu (now a district of Shanghai), but closed in 1860 when the Taiping Army attacked the area. It re-opened in 1864 in what is now the Xujiahui area of Shanghai, on what is now known as Puxi Road. Throughout its history, the orphanage accepted children between age 6 and 10, some of whom were orphans, and some of whom came from families to poor to support them. While at Toushanwan, they would receive traditional Catholic educations, as well as training in specific trades – for example, printing, painting, stained glass, and religious sculpture – in workshops run by skilled practitioners (some of whom were Catholic priests). Below, an undated photo of a Toushanwan painting workshop given to me by someone connected to the Shanghai diocese: 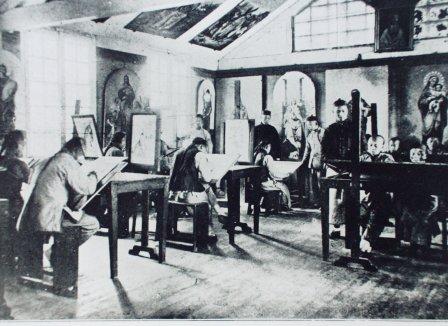 Not all of the work was religious in nature. Toushanwan accepted secular commisions (for example, the Ruijin Guest House complex), and was noted for the quality of its metal household goods, its medical implements, and its bells (the latter were sold all over Southeast Asia). Toushanwan’s electroplating technology (applied to – among other taks – gold plating) was the finest in China up until its demise. In 1949, there were 200 orphans at Toushanwan, but those numbers declined steadily until the orphanage’s closure in 1960.

Since then, almost everything that the workshop produced for Shanghai has disappeared from the city (either destroyed or – in very rare cases – exported). Consider: the window pictured at the opening of this post is one of only two works that survive from a workshop that produced thousands of art windows. Below, an undated image of the stained glass workshop during its heyday. 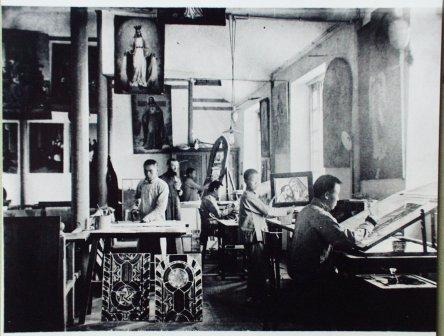 [Much of the history recounted in this post is derived from ‘Zikawei in History,’ published in 2005 by the Shanghai Culture Publishing House.]