This afternoon, for the first time in months, I stopped by the Best Buy in Xujiahui (which happens to be the first Best Buy in China). And, while riding an escalator to the second floor, I saw something unexpected: roughly ten racks of CDs and DVDs. Real ones, not pirated ones. And they seem to have turned up since my last visit in, I think, January.

As fans of American retail surely know, Best Buy has seriously reduced the volume of floorspace devoted to CDs and DVDs in its US stores. At one time, I think, CDs must have taken up more space than any other single item in the average Best Buy. But today, they’re hard to find, downsized by itunes and piracy. 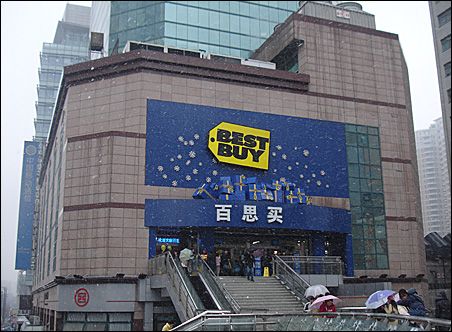 So what on Earth makes Best Buy China think that it’s a good idea to add floor space for DVDs and CDs in a country where pirate DVD and CD shops advertise in state-owned newspapers, when it can’t sell CDs and DVDs in a country where piracy altered their floor plans? Certainly, they aren’t trying to beat the pirates on price. For example, a copy of the most recent James Bond film, Quantum of Solace, is selling for RMB 50 (US$7.31) at Best Buy (wildly cheap by US standards); meanwhile, just up the street, at a pirate DVD kiosk, the same film sells for RMB 7 ( US$1.02). A higher quality copy, complete with DVD extras, was going for RMB 12 (US$1.76). Likewise, a copy of Sheryl Crow’s most recent CD was selling at Best Buy for RMB 72 (US$10.53); at the DVD kiosk, the same CD could be purchased for RMB 5 (US$.73).

Obviously, I’m not privvy to the thinking of Best Buy’s senior management, but a couple of years ago, while reporting a story for Fortune, I was. And at that time, senior management patiently explained to me that Best Buy China hoped to capture the upper end of the Chinese consumer electronics market by offering a more pleasant shopping environment and service service than what is typically found in crowded, bargain-first Chinese electronics markets where fakes and defective products are common (as proven by the large number of defective memory cards in my top desk drawer). Though the company wasn’t ignorant of price sensitivity among even the most affluent Chinese consumers, it nonetheless was aware that a premium shopping environment justifies – to an extent – higher prices.

With this in mind, I suspect that Best Buy China’s CD/DVD department is based upon this theory: If higher-end Chinese consumers are willing to pay a little more for, say, an ipod, just to be sure that it isn’t fake or defective, wouldn’t they then be willing to pay several times more for a DVD if it’s guaranteed not to seize up at the one hour mark?  Based upon the ten minutes that I spent alone in the CD/DVD department, the answer – today, at least – appears to be ‘no.’ But, admittedly, that’s ten minutes spent testing a theory that I cooked up on the spot. Perhaps there’s more to this than what I saw, and certainly, Best Buy has a better statistical understanding of its customers than I do. But even with those points in mind, I just can’t help but shake the feeling that the average Best Buy China customer – no matter how wealthy – probably has a relationship with a local pirate DVD salesman, and won’t look twice at the racks taking up space on the second floor, next to the stereos.

Any other theories out there?

[Before someone jumps to point out the obvious: yes, I’m aware that other foreign and Chinese retailers sell legit CDs and DVDs, and they wouldn’t be doing it if there wasn’t money to be made. But Best Buy, it seems to me, is awfully late to the game. A sudden, somewhat related thought: don’t they have anything more lucrative to take up that floor space?]