[Perhaps it was too much sun. In any case, the title of this post has been changed on the suggestion of several readers and one commentator.]

Early this afternoon a companion and I climbed the 367 steps to the top of Shanghai’s Lupu Bridge where, 550 meters (1800 feet) at a still undetermined elevation 100 meters (328 feet) above the Huangpu River, we obtained a complete, high-altitude view of the World Expo 2010 site. Below, three images of the three main fairground sections, totaling a massive 5.28 sq km (2 sq miles). As the organizers like to point out: you are looking at the largest Expo fairground in the century-and-a-half history of Expos, to be filled with the largest number of confirmed attendees (200+ countries). And yet, for reasons that I only partly outlined in this dispatch for The Atlantic, the United States is not among them (the inexperienced, State Department-authorized US pavillion group has – with 360 days to go – raised less than $2 million of a $61 million budget; no shovel has yet been lifted). I will have much more to say about this sad state of affairs very soon (in another forum). For now, enjoy the photos, and follow along with this site map from the official Expo 2010 website.

First, the Southwest section (from the perspective of the bridge), Pudong side. Note the inverted pyramid structure in the background – that’s the nearly complete China pavilion : 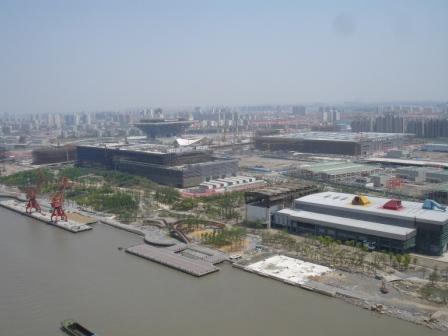 More images after the jump …

Next, the southwest section (again, from the perspective of the Lupu Bridge viewing platform), on the Pudong side: 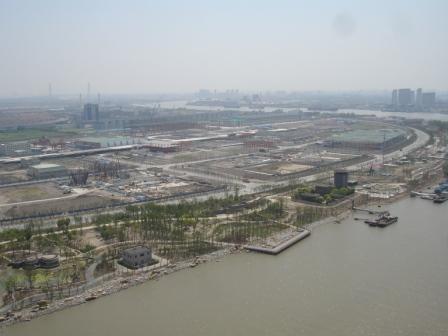 And finally, the northeast section, Puxi side: 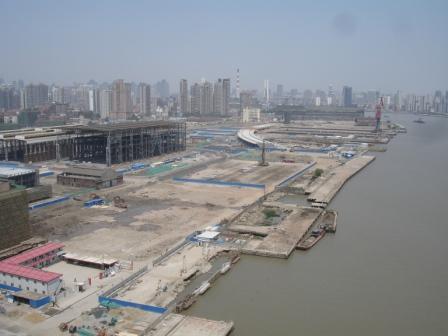 I’m not sure that the images do justice to the scale of this enterprise. So let me be clear: it is massive, and filled with trucks, cranes, dust, and construction workers – everything in motion. Over the years I’ve become accustomed to seeing large-scale Chinese construction sites, including cities being assembled from scratch, in farm fields. But this project is of an entirely different order, if only because it contains so much activity in such a concentrated areas. And, with that in mind (and not to beat a dead horse), it’s all the more embarassing that the United States hasn’t managed to lift a shovel on the plot of land that the Chinese have reserved for it.

[Addendum 5-9: Lot of folks writing to ask how to go to the top. Get detailed info here.]