Hardly a season passes without some esteemed media organization running a story on the export of e-wastes from the developed world to south China (Guiyu, in particular). 60 Minutes did the last major one (my thoughts here), and PBS’s Frontline is in the midst of producing the next one. I’ll spare my readers – and myself – the trouble of listing other notable instances; suffice it to say that you won’t lack for results if you google “Guiyu.”

In any case, there’s a couple of necessary components to any Guiyu-oriented story, among the most important being traceable shipping containers leaving a US scrap yard for Hong Kong. Now, as it happens, those are not always so easy to track down. Folks in the e-waste business tend to be discrete and careful, and the people who try to track them down tend to be ignorant about even the most basic details of how the business operates. So it was all the more surprising to me when – back on March 9 – a company located near Portland, Oregon emailed to offer me (and everyone else unlucky enough to land on their mailing list), this: 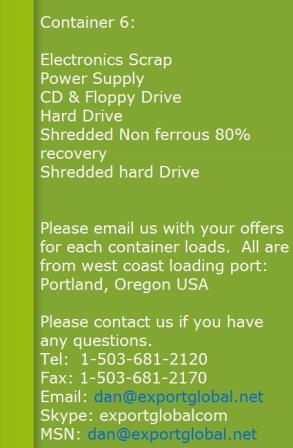 How, you may be asking, did I end up on ExportGlobal‘s email list? I’m not exactly sure, but if I had to guess, I’d say that the company acquired the delegate directory from a Chinese recycling conference held in Beijing in November. And whoever did the data entry didn’t bother to note that I was registered for the conference as MEDIA. Next, you may wonder: why didn’t I say something back in March? Shanghai Scrap was on a strict hiatus when I received that offer, and anyway, I didn’t think that anybody could be so boneheaded as to send e-waste tenders to a reporter and blogger more than once (and I really do believe that everyone is entitled to do something stupid – once). Oh, how wrong I was: since that first email I’ve received three more emails from ExportGlobal – two of which include opportunities to purchase e-waste, including this most recent offer, sent last Thursday … 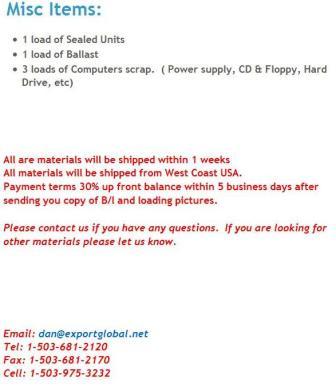 Out of curiosity, and just to clarify a couple of issues, I replied to Dan’s Thursday email with a couple of questions (without revealing myself as a reporter). In particular, I wanted to determine whether or not the material was legal for export, and whether or not it contained hazardous materials. So I asked if it contained any computer monitors (the one category of e-waste illegal for export under US law – unless the exporter first notifies the EPA and obtains permission from the importing country), and whether the sealed units (usually sealed refrigeration compressors filled with used oil) were drained. He replied as follows:

Sealed units are not completely drained. For computer scrap there is no monitors.

In other words – Dan at ExportGlobal is offering for sale (and, presumably, export) used oil. And used oil, it must be said, cannot be imported by any country in Asia (not that it doesn’t happen). Perhaps more interesting, Dan tells me that he is selling “computer shred.” For those not familiar with the term, “computer shred” is exactly what it sounds like: computer parts – everything from circuit boards to CD-ROM drives – that have been shredded for the purpose of running them through magnetic separation devices to help facilitate recycling. And this matters because shredding is one of the preferred environmentally secure means of processing e-wastes in the developed world. Alas, many people in the e-waste processing industry have long suspected that many certified e-waste shredders are exporting their “computer shred” to the developing world, rather than processing it themselves. Dan’s email suggests that he might very well be buying from one of those certified exporters.

In any case, nothing obviously illegal in Dan’s first email; the containers in question don’t include monitors. So I wondered: does he ever ship monitors? Here’s his response:

For those wanting to get in touch with Dan and ExportGlobal, the company website can be found here.

[Again, just to be clear: export of monitors from the US is legal only if the EPA has been notified, and the importing country has agreed to accept the shipments. And also, just to be clear: the email was sent out on June 4, which means that the containers will be shipped by the 11th. Get to work, activists and reporters!]