Yesterday Shanghai Scrap reported that Shanghai Expo 2010, Inc., the group authorized by the US State Deparment to fund, design, and build a US pavilion for Expo 2010, had issued a press release claiming – falsely – that the US Congress had adopted a resolution in support of their efforts. The key quote in the undated release – “We are grateful that the US Congress has adopted this resolution …” – was made by Shanghai Expo 2010, Inc. co-chair Frank Lavin – who also served as an ambassador to Singapore and an Undersecretary of Commerce in the most recent Bush Administration. Lavin couldn’t have been more wrong: not only has the resolution not been adopted by Congress, it has only three co-sponsors, hasn’t left committee, and was introduced by impeached former federal judge Alcee Hastings. In other words: Congress is not supporting Shanghai Expo 2010, Inc. Not even close.

In any case, overnight (in Shanghai), the press release mysteriously disappeared from the official Shanghai Expo 2010, Inc. website – without any explanation or apology (to Congress). No doubt, Lavin and his colleagues are hoping that the matter will be forgotten. But fear not, dear readers: while preparing yesterday’s post, I made a screen capture of Ambassador/Undersecretary Lavin’s false claims of Congressional support, and – for posterity’s sake – I am posting them below (click for an enlargement): 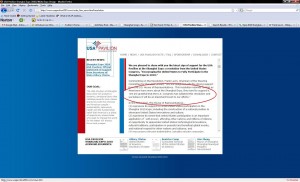 Unfortunately, this is hardly an isolated incident. Over the last several months, several other members of Shanghai Expo 2010 Inc have made similarly misleading statements to bolster their effort, and then backtracked when those statements were either disproven or no longer in their interests (for the most notable example, see the fourth paragraph of this recent blog post). And, as I’ve noted before, it is precisely this pattern – this duplicitous pattern – that has so damaged the pavilion’s prospects among Shanghai expats and businesses.

[Personal Addendum: A promise to my readers: never again will you confront three Expo-related posts in a row.]