Two things I want to make clear from the outset. First, despite appearances, Shanghai Scrap is not becoming all US Expo 2010 Pavilion, all of the time. It just seems that way. Rest assured: I’ll be back with some quality iron ore/Rio Tinto blogging next week (for the record: I was blogging Rio Tinto and price-fixing in China back in 2007 [ie, before it was cool, ed.]). And second, nobody was more pleased to see the United States break ground on an Expo 2010 pavilion than me. I was there, and I clapped.

Now, for some reason, the pavilion groundbreaking – and other Expo-related news – just doesn’t seem to capture the imagination of the US media. So, in the interest of bringing Expo to the world, Shanghai Scrap offers the following images with limited commentary (orders from above: commentary and reporting must be saved for a future publication). First, the actual “groundbreaking.” From left to right, Beatrice Camp, US Consul General in Shanghai; Jose Villarreal, Commissioner General of the US Pavilion; Gary Locke, US Secretary of Commerce; Yang Xiong, Vice Mayor of Shanghai; Ma Xiuhong, Vice-Minister of Commerce; and Hong Hao, Director General of the Shanghai Expo Organizing Committee. 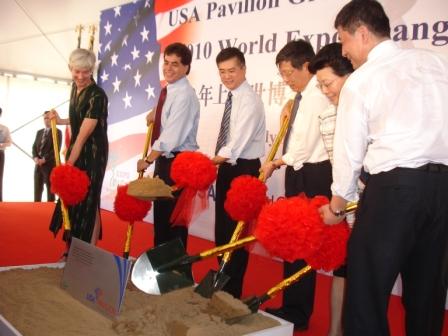 No, that sandbox is not the future location of a budget-rate US Expo pavilion. But it is a sandbox, no doubt about it. In fact, the actual pavilion site, not more than 10 meters away, has had construction crews working on it for some time, already (not sure how long – but clearly, the Shanghai organizers were determined that the site be used by someone, US or otherwise), and wouldn’t have made for a very attractive setting. But whatever. See after the jump for three images of the actual site. 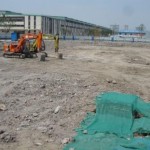 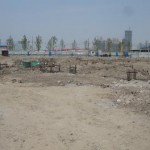 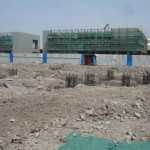 It was nice to see Gary Locke at the event. I had the chance to meet him several years ago, and he remains the charimatic figure whom I recall. It’s to the credit of Barack Obama that he is now the Secretary of Commerce. China Daily summarizes the relevant sections of his comments, and those of other dignitaries, here.

From my perspective, there were two curiosities at the event. First, the members of Shanghai Expo 2010, Inc., the State Department group authorized to fundraise, design, construct, and run the US pavilion, were – again – not on stage at the groundbreaking – despite the fact that the co-chairs were in attendance.

And second, someone placed red pom-poms on the ceremonial shovels used to break ground. An off-note, if you ask me. Below, an image of the shovel girls in waiting. 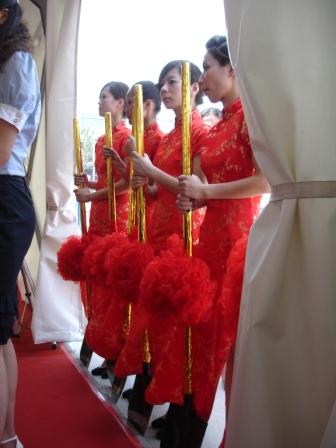