[UPDATED 10/23: This morning I received an email from Mark Ritchie, Minnesota’s Secretary of State, in regard to this post. He explained that Minnesota overseas voters are no longer required to obtain witnesses (unlike local voters). Most likely, the SLP elections officials simply gave me the wrong application, and then proceeded to send the ballot to Minnesota, anyway. He indicated that he’s looking into adding some “large letters of warning” to the absentee ballot application to prevent local officials, and voters, from making similar mistakes.

Thanks Mark – there aren’t too many statewide officials, anywhere, who would go through the trouble of looking into this, and getting back to me.]

I’ve spent seven years abroad, and in that time I’ve cast a ballot in every presidential and mid-term election dating back to the Fall of 2002. In one case, for sure, I cast my ballot in person, back home. But otherwise my ballots have been cast absentee, from overseas, and for that I must thank the good folks at the Hennepin County Elections Division. Despite the fact that state law requires them to send out the ballots no earlier than 30 days before an election, my ballots have made it through the notoriously slow Chinese postal system – both directions – to be counted.

Which brings me to the local elections to be held November 3 across Minnesota. I must admit: in seven years, I think I’ve voted absentee in exactly one school board race. This year, though, it’s different. Back in September I happened to be in the vicinity of St. Louis Park city hall and registered for an absentee ballot for this fall’s municipal and school board races. The ballot was sent out October 2 (so says the postmark), and I received it yesterday, October 18 (we have Sunday postal delivery in China). That leaves me just over two weeks for the combined postal services to return it to Minnesota (just enough time). Anyway, as soon as I returned to my apartment I tore open the envelope, checked the directions, and stopped dead. The reason? “Step 1,” reproduced in in full, below (click to enlarge):

According to later directions, the witness must then examine the unmarked ballot and – after it’s been marked – provide a name, address, and signature on the absentee ballot envelope to be returned to the relevant election department.

In other words: To participate in a municipal election, an overseas absentee Minnesota voter must find another Minnesotan, or someone capable of administering an oath, to sign it. And they need to do it quick because they likely have only two weeks to return the ballot via regular post (of course, that doesn’t count for people who want their school board votes counted so badly they’ll shell out US$30 for FedEx). With that in mind, a couple of relevant notes:

1. Neither presidential nor mid-term elections in Minnesota require absentee voters to obtain a witness to certify their ballots. So far as I know, this requirement only applies to city and school board elections. Why? Beats me. Where I come from, Presidential elections are generally viewed as more important than municipal and school board races.

2. Believe it or not, it’s really, really @#$% hard to find another registered Minnesota voter in Shanghai. I realize that this fact might not be obvious to the geniuses at Hennepin County Government Center who – after all – are surrounded by registered Minnesota voters. But abroad – heck, for college students in Chicago, say – that’s a non-trivial task, and the result is undoubtedly un-returned ballots.

3. Yes, the instructions and the ballot envelope provide a second option: “a notary public with the authority to administer oaths.” For me, that’d mean a trip down to the US Consulate, a long wait in line, and – quite likely – a refusal (don’t get me started on the US Consulate in Shanghai). But at least I have somebody who might consider refusing me. That’s simply not the case for Minnesotans abroad who live in cities without a US Consular presence (in other words: most Minnesotans abroad). In other words, due to this completely asinine requirement that doesn’t apply to presidential and mid-term elections, those Minnesotans are – effectively – disenfranchised from voting in local elections.

As for me, I have the benefit of a consulate and several registered Minnesotans willing to help me. But both options require that I spend at least half of a day, traveling to obtain a signature and – like my registered brethren back in Minnesota – I just don’t have the spare time to spend doing that, no matter how much I value my vote (and I do).

So, for the record, I’m going to vote here and now, scan and upload the ballot, and if any of the races in which I just voted are decided by a single vote, the people of St. Louis Park, Minnesota can blame the short-sighted provincial jackasses who decided that overseas absentee voters need to find a witness before they can send their school board ballots home. Click to enlarge: 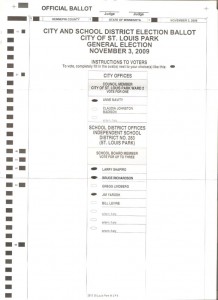 I’m so mad about this, I’m listening to the Urban Cowboy soundtrack – again.