This afternoon, around 4:00 PM, I left a friend’s thirteenth floor apartment and paused to wait for the elevator. While I did, I gazed out the window and noticed a stunning, multicolored striped building in the near distance. Though incomplete, I think it’s an absolute stunner, and I took out a camera and snapped a couple of photos – including the one below: 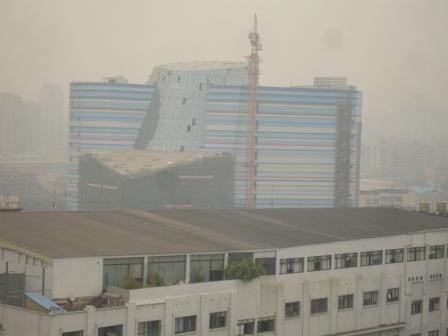 Now, if you don’t live in Shanghai (or China, for that matter), you might take a look at this photo and wonder just what in the hell I was thinking. After all, the colors are drab, dulled – quite obviously – by the thick smog that hung over the city this afternoon. And, I must concede, when I pulled up the image on my laptop later in the afternoon, I thought the same thing. But that’s not what I thought as I stood at the window, staring at the building, nor, earlier, as I sat on a balcony on the opposite side of the elevator lobby, enjoying a different view of the city. Indeed, like most people in Shanghai over the last week, I’ve been praising the unseasonably good weather and clear skies that we’ve been enjoying. It’s been a treat – or so I thought.

And that has me thinking.

One of the more insidious aspects of living in a heavily polluted region is waking up one day and noticing that you’ve been adjusting your living standards downward. It’s not something you do consciously. Instead, it’s a gradual process of acceptance, a readjustment of what you used to consider normal and healthy. Eventually, you reach a point where you accept heavily polluted days as “perfect” – especially as compared to what you might have seen last week in, say, more heavily polluted Beijing – and don’t even notice how the colors are drained from the day, anymore. Of course, there are people who should know better: Shanghainese over the age of thirty; American Midwesterners like me. But what’s unsettling and tragic is that Shanghai, and China, is now home to a generation of young people who really don’t have any points of comparison. For them, the smoggy day in the above photo is a beautiful fall day – at least by the standards of the last twenty years.

In coming weeks, China will send a delegation to the Copenhagen Climate Change conference staffed by people who presumably know the difference between a clear day, and a smoggy one. That’s not always going to be the case. In fact, if something isn’t soon done about the mess outside of that 13th story window, China’s environmental bureaucracy will be staffed by people who know the beauty of a clear fall day only because they’ve read about it, or seen photos of one. But without their own memories, I can’t imagine that they’ll value one as much as people – like their grandparents – who remember what it feels like to breathe in the crisp, clean autumn air.