Earlier this morning I walked out of my apartment building en route to the post office when I came across the corner scrap dealers selling their inventory of home appliance scrap – ie, e-waste, as the kids now like to call it – to their preferred buyer, a roaming Shanghai motorcycle e-waste merchant.  Then and there, I slipped the camera from my pocket (I always travel with one) in hope of capturing what is – in one frame – a nearly complete inventory of the types of domestically-generated Chinese e-waste that has begun to jam the country’s informal e-waste processing sector (as described in my recent piece for Foreign Policy). Click to enlarge: 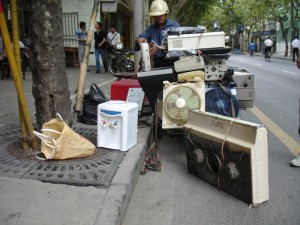 He has: a television, several printers, several DVD players, one desktop PC, several air-conditioning units (freon and circuitboards being the hazards there), a water cooler (presumably, more freon) and – for non-hazardous good measure – a stove-top and a couple of fans. Television aside, most of this material will be disassembled in the Shanghai area, with the plastics and metal (including insulated wire) recycled locally. The remaining circuit boards and the television will go south for recycling in Guiyu and other environmentally unsound e-waste recycling centers in south China.

For years, the media has rightfully been focused on the import of e-waste into south China. But, as I’ve noted on this blog, again and again, that story was long ago replaced by the growing tide of e-waste being generated within China, and going south. And that’s just a small part of the much bigger story of how China is only beginning to think about how to deal with the large amounts of waste that its nascent consumer society has been generating for years now. In recent weeks, however, a few reporters have begun to shift their focus. Two stories in particular stand out: Chi-Chi Zhang’s fine AP report on solid waste problems in Henan Province; and Shi Jingtao’s really good piece on solid waste sorting for SCMP (oddly, now missing from the site). Meanwhile, based upon my email, academics and other researchers are starting to take a serious interest in the problem: over the last two weeks I’ve received almost daily inquiries from someone looking into the topic (and I promise to get back to everyone just as soon as I can). I’m glad to see it: this issue is long over-due for some serious reconsideration.