[Note 11/13: A couple of folks have left comments expressing doubts about whether, in fact, the mask in question was used for welding. It was.]

I’ve just returned to Shanghai after 12 days of roaming up and down Guangdong. I’ll have a bit more to say about some of what I saw down there in the coming days. For now, though, I leave you with what stands as one of my favorite photos out of several hundred that I took down there. It was taken this morning, just at the point where I was putting down my camera after deciding that – twelve days into the trip – there was nothing new for me to note. At just that moment, my traveling companion for much of this trip – a gentleman known to some as Big Dog – elbowed me and said: “Look at that guy’s welding mask.”

“What welding mask?” I asked. 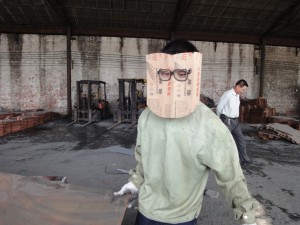 Thoughts on Guangdong, the state of China’s economy, and an essay on Obama in China, all upcoming – after a night’s rest.