Over the last two weeks, I’ve made several trips down to the sprawling 5.28 sq km Expo 2010 grounds on the Huangpu riverbanks. For my American readers, this revelation likely doesn’t generate much excitement – even if I tell you that – in scale and historical importance – Expo 2010 is designed to evoke and echo the Great London Exhibition of 1851, the 1893 World’s Columbian Exposition in Chicago, and the 1900 Exposition Universelle in Paris, and the 1939 and 1964/5 New York World’s Fairs. It’s one thing to hear such grandiosity (including the reported, and truly grand, US$46 billion being spent on Expo 2010), and another to see it in person. So, without much further ado, I’m going to share a set of photos that I’ve taken at the Expo grounds over the last couple of weeks – starting with an image taken on the elevated Expo Boulevard that runs most of the long length of the 3.93 sq km Pudong side of the site. 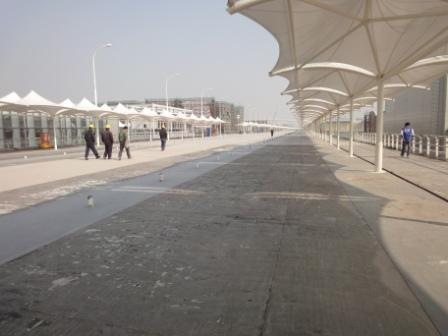 The dozens of national pavilions and group pavilions are located on both sides of this structure, and after the jump, I’ll share some links – when I can find them – to images of what the completed structures are intended to look like. I make no apologies for the quality of the photography – my trips to the grounds aren’t for photos, and when I take them, it’s usually in very brief passing. But I hope that they give readers a sense of why this event is so exciting – at least, to those of us lucky enough to visit it in the construction phase …

Let’s get started with something spectacular – the 6000 sq meter Spanish pavilion. Designed  by Tagliabue of Catalan EMBT Miralles-Tagliabue, it is the current front-runner for the First Shanghai Scrap Pavilion Architecture Prize. Below, an image taken from the second floor of the structure [click to enlarge this and all images associated with this post]. 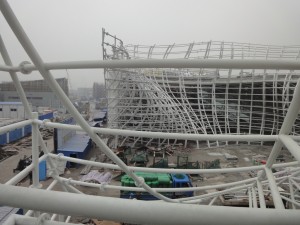 But here’s the best part. That rolling, waving steel structure? In coming weeks, it’s going to be covered in multi-hued wicker. A rendering of the completed pavilion can be found here, and it’s worth clicking. Below, one more image, taken from ground level, with a worker in the foreground, for scale. Shanghai-ren will recognize the Lupu bridge in the upper background. 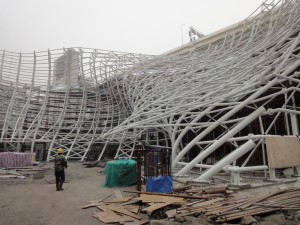 The area to the right will house a tapas restaurant where I intend to eat on a regular basis.

Moving right along — let’s take a quick stop at the Caribbean Community Pavilion. Most of the 190 or so countries represented at Expo 2010 can’t – or won’t – afford stand-alone national pavilions like those being built by Spain (for €18 million). So, instead, they rent stalls within continental and regional pavilions. 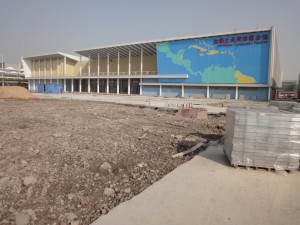 One of the individuals who accompanied me past this structure made an important note. “That’s not the Caribbean Pavilion,” he said. “That’s the food court.” A good point, I think. Note, also, that the large area in front of the food – I mean, pavilion – will host a stage for entertainment sponsored by the Caribbean nations.

But since we’re on the topic of food courts, below an image of the less complete South and Central American pavilion. Same concept as the Caribbean Pavilion, though not nearly as interesting a photo. 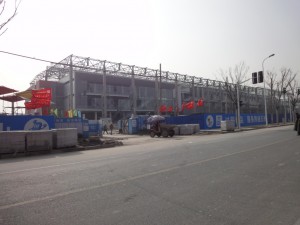 Leaving the Americas for a few moments, let’s shift back to the European group, and an image of the murky French pavilion. I don’t know much about this structure, except that the official Expo 2010 site couldn’t help itself and declared it “a national pavilion with a simple look, but huge budget.” How huge? Try on €50 million for size. Somebody’s trying to impress somebody. Viva le France, below: 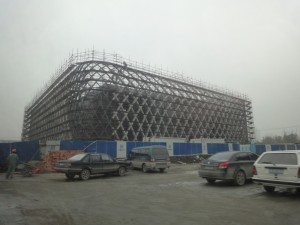 Moving toward the Urals, we next take a brief stop at the Russia pavilion. Of all of the pavilions that I’ve had the chance to see up close, this is the one that makes me wish I’d had more of a moment to photograph it. Enlarging the image, below, should give some sense of the wonderful filigreed pattern that’s being carved, silhouette-like, into the tower in the foreground. But you’d best click over to the official images, and the description of the Russian pavilion as faerie-tale-like. It is. 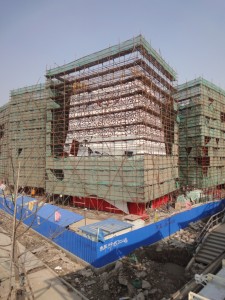 One quick, final note on the Russians. I’m told, with reasonably good authority, that they’ve taken to bragging that their pavilion is bigger than the US pavilion.

Next, we move to the other side of the river, and the rather uninspiring set of commercial pavilion sponsored by corporations on the 1.35 sq km Puxi riverbanks. Still, it’s all part of the fun, so let’s begin with the exciting PICC Pavilion (that’s People’s Insurance Company of China, folks). In fairness, this is an image of the pavilion’s backside. On the other side, the front porch, large letters spell out … PICC. 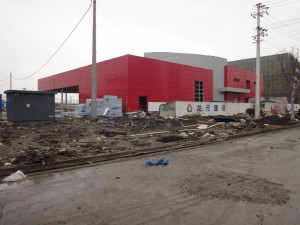 In fairness to the company men, they are busy insuring a large number of the pavilions – at least, that’s what I learned from this article which includes an artist’s rendering of the completed structure.

Since we’re in the dull phase of this tour, let’s hit bottom, and then slowly climb back to the heights of some of the finest pavilions. I am, of course, talking about the large corporate group pavilion slated to house Cisco and – I’m not joking – TOTO Toilet World. 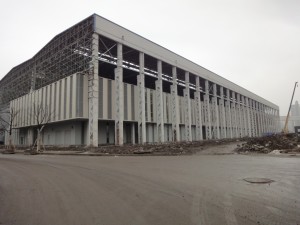 Two thoughts on TOTO Toilet World. First, it does make sense for the world’s largest toilet manufacturer to exhibit in the world’s fastest growing housing market. But I have to wonder: does it make sense for Cisco to be located in the same building?

Anyway, last corporate pavilion: the State Grid pavilion (State Grid is China’s national power company). On the day that I visited, the area surrounding this pavilion was cramped with crews and equipment, making it impossible to take a complete picture of the structure. For an artist’s rendering of the completed structure, see here. Below, an image taken inside of the under-construction building. The future escalator will be located to the left; on the right, just in view, is the entrance to the Magic Box, a six-sided, IBM-designed cubical television designed to hold 250 viewers. I’m told it’ll show a several minute film on the history of electricity. 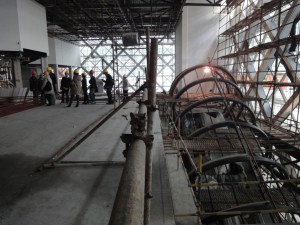 So much for the Puxi side. Let’s move back to the Pudong side, and the national pavilions – starting with an image of the Romanian pavilion – yes, it’s a giant green apple with a slice to the side – with the Dutch Pavilion, named “Happy Street” in the background. 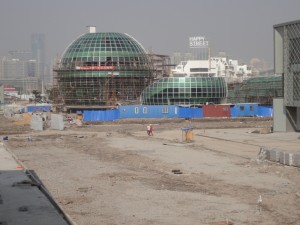 An artist’s rendition of the Romanian pavilion – we’re withholding judgment for a while on that one – can be found here. And a nice, brief animation of Happy Street  – love the pavilion, hate the name – can be watched here.

Crossing back to the Americas side of the Expo Boulevard – specifically, the North American section – let’s have a look at what I confidently predict will be one of the most popular pavilions, and deservedly so: Canada’s. So far, at least, most of the talk in China has concerned Da Shan’s appointment to be the Canadian Commissioner General (if you don’t live in China, that means nothing to you, so please go here for more info). But, with all due respect to Da Shan, the Canadian pavilion’s greatness is largely due to the involvement of Cirque de Soleil and its creative director, Johnny Boivin. An artist’s rendition of the structure can be found here; below, the current state of the pavilion. 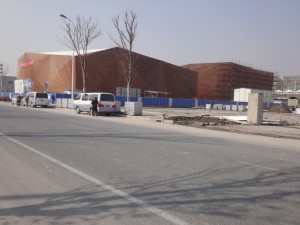 And below, a closer, side view. In this image the lovely wood facade is a bit clearer. In person, it’s striking: 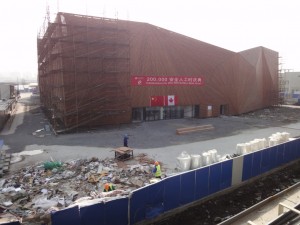 There’s a whole lot of secrecy surrounding what – exactly – the Canadian pavilion will contain. But – and this is worth noting – the designers have built-in space to accommodate two hour lines; folks associated with this sort of thing tell me that probably won’t be enough.

Directly south, and across the street from Canada, we come to a cluster of pre-built pavilions that will house – left to right – Peru, Colombia, and Brazil. These pre-built boxes are an expensive step-up from the national “booths” housed in the regional pavilions (like the South and Central American pavilion in the background), but much cheaper than taking the Canadian route and building from the ground-up. 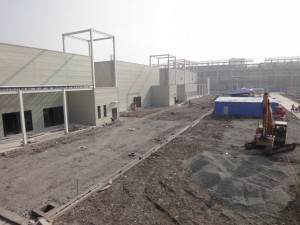 These buildings will not remain glorified pole barns. The countries that rent them have the right to trick them out in whatever way they see fit – including structurally. They are also big: the Peruvian and Colombian structures are roughly 1000 sq meters; the Brazilian structure is 2000 sq meters. The wide area in front of them is shared by the stand-alone USA pavilion. Below, a photo similar to the one, above, but with a better view of the plaza and a small piece of the under-construction USA pavilion. 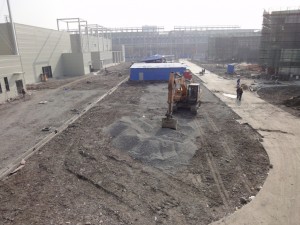 The plaza is going to handle overflow lines from the four pavilions and, at night, host a stage and entertainment. Assuredly, it will be more attractive than the photo suggests.

And that brings us to the troubled USA pavilion. Since this is a tour, and we’ve been enjoying ourselves, I’ll merely suggest that readers interested in the troubled history of the project can find a compendium of my reporting on the subject by clicking here (I’ll have more to say on the murky – nay, shady – dealings surrounding the pavilion early next year). For now, two images of the current state of construction. First, a photo from the elevated Expo Boulevard: 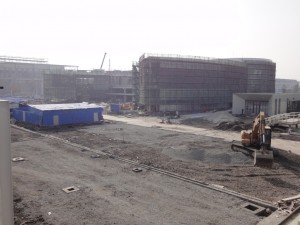 The image is best compared to this artist’s rendition of the final design. Below, an image taken just in front of the right-hand wing. 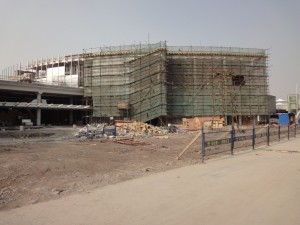 It’s an okay design, primarily built around two theaters which will show a specially produced film about a thirty-year-old Chinese-American woman in 2030, looking back on a visit to Expo 2010. In other words, a not particularly inspiring or original concept to go with a not particularly inspiring pavilion design. Compared to the structures built by other countries, and – most important – the programming that will take place in, say, the Canadian pavilion, the US design is, shall we say, present and accounted for. Frankly, I think it’s no surprise that – unlike pretty much all of the other self-built national pavilions, the USA design is the only one that I haven’t seen pasted to the side of a Shanghai city bus or construction fence. As an American who has long felt that a quality US presence at Expo 2010 should be a national priority (message: I really, really care), this is a disappointment. So here’s hoping that there’s some magic left in the USA pavilion group’s considerable bag of tricks.

On the flip side, it’s pretty hard to find a city bus or construction fence that doesn’t include an image of the China pavilion. Alas, I didn’t get a chance to approach the China pavilion, and the only photo that I was able to snap was the one, below, as I exited the grounds below the Lupu Bridge. Still, it seems like a nice way to end this informal tour. Perhaps, when I return to the grounds after the New Year, I’ll have the chance to snap something better. Until then … 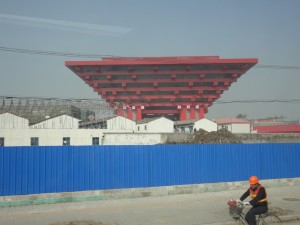