A few weeks ago I posted some images (“A Cavalcade of under-construction Expo 2010 Pavilions“) from a few of my December visits to the intensely busy Expo 2010 grounds. Readers – or viewers, in this case – seemed quite interested in them, so I’m going to follow-up on that post with another set of images of under-construction Expo pavilions – taken Monday – and some accompanying commentary. Whenever possible, I’ll link to artist renderings of what the completed structures will look like. Those interested in learning more about the pavilions and Expo site might take an interest in the nifty new English-language Expo site that recently went live with an interactive map and tour of the grounds (try to ignore the irritating narrator, though). Anyway, let’s start this month’s cavalcade with something spectacular: Happy Street (that’s the name), the fantastic Dutch pavilion. 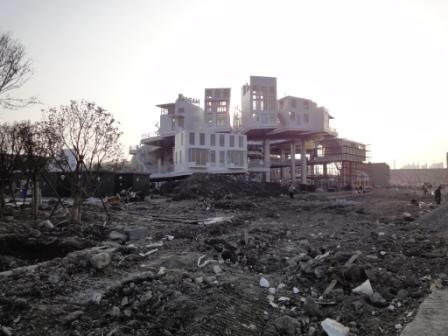 In the last month many of the pavilions have really come to life, the grounds seems busier than ever and – this image aside – landscaping is underway. Which makes sense – we are now 102 days from the start of the largest Expo (or, World’s Fair, for my American readers) in history, and despite all that’s been accomplished down there, it must be said that a daunting amount of work still needs to be done – especially with the extended Chinese New Year break less than four weeks away. Anyway, many more photos after the jump …

I think what I like most about the Dutch pavilion is its complexity and yet – at the same time – it maintains a kind of playfulness. Which, I believe, comes through in the next photo [click for an enlargement of it, and all that follow], taken from the front of the pavilion: 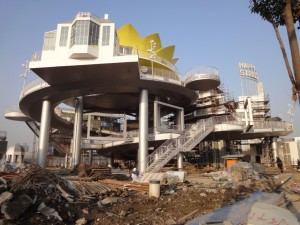 And one from the back side (at least, it looks like the back to me): 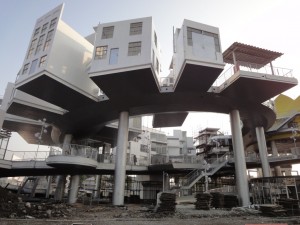 Directly across from the (assumed) back side of the Dutch pavilion is the unambiguously avant garde UK pavilion. At Shanghai Scrap, however, we prefer to label it “terrific.” Thomas Heathwick, the designer explained the concept this way:

Our task is to make the UK pavilion stand out. We decided to do this by making one extraordinary object; not recognizable in conventional terms, set in a calm open site. Each visitor will be able to explore both in their own way. Rather than making a straightforward advert for the UK, we want our pavilion to give each person a more profound understanding of the richness of contemporary UK culture.

Here’s a good artist’s rendition (trust me, you need to click it to fully appreciate the creativity at work here) and, below, the “extraordinary object” as I found it on Monday. 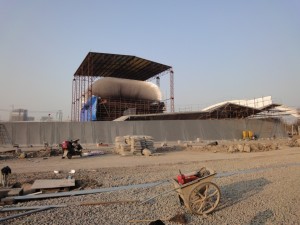 That fuzzy quality atop the pavilion is the combined effect of tens of thousands of 7.5 meter, transparent rods. When the breeze blows, they blow with it. Below, an image taken a bit closer to the object itself: 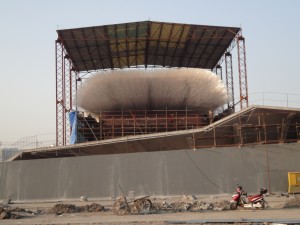 Shifting from the fantastic, to the mundane (not everything is a masterpiece, after all), I give you the Romanian pavilion – or, “Greenopolis,” as the sign atop it reads. 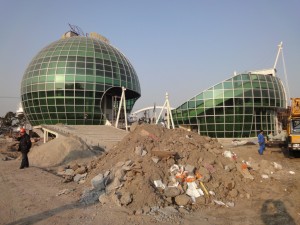 No, your eyes are not fooling you: it’s an apple with a slice cut from the side. Not to be mean, but it really puts me in the mind of, say, 1974, rather than 2010. More info on this green glass wonder, here.

And since we’re on the subject of uninspired designs, let’s briefly stop at the UN pavilion which – in my opinion – quite successfully evokes the spirit of lifeless government compounds from around the world. Way to go, guys. 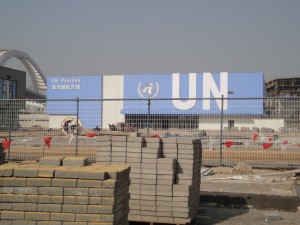 Moving back into the realm of design and imagination, let’s have a look at the colorful Mexican pavilion. The design features three levels, with the top serving as an open, public space beneath figurative kites. Below, the kites. 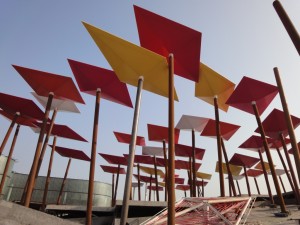 Next, an image of the Mexican pavilion as a whole. Note that the interior is located beneath the tilted open space. More info on the pavilion can be found here. 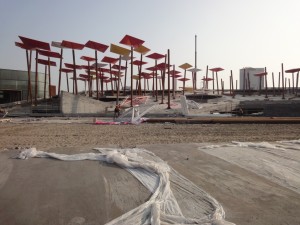 We’ll come back to more European pavilions in a moment, but first let’s take a stop over at the Asian section of the Expo grounds, and the Malaysian pavilion. Located along the Expo Boulevard that runs the length of the grounds, this pavilion’s designers seem to have chosen to take a more traditional route, emphasizing typical Malay architectural forms. An artist’s rendition here. 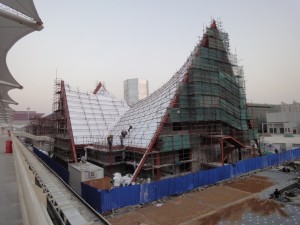 Similarly, the Thai pavilion, too, hews to the country’s traditional architectural forms. I wasn’t able to get close to that one, so below, a somewhat distant view of the current state of construction. Thailand maintains a nice site that provides lots of views of what the structure will look like when complete, here. 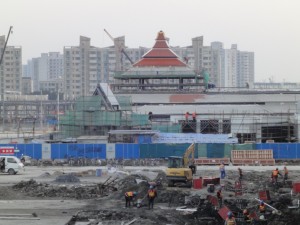 Having now walked most of the Expo site, I must say that – China pavilion aside – no national pavilion dominates the site quite so forcefully as the Australia pavilion. Located at an Expo Boulevard intersection, this rust-colored monolith is impossible to miss. Nothing special, in terms of design, though I must say that the rust-colored exterior is really striking at sunset. More info available at the official Australian site. 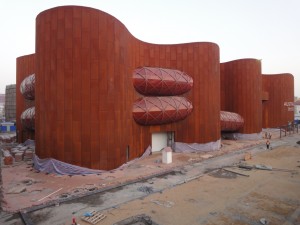 Different countries have different reasons for participating in Expo. Some do it as a national branding exercise. And some, like Australia, seem to do it as a means of visibly expressing the depth of their actual or hoped for relationship with China. In some sense, the feelings appear to be mutual: in addition to having secured a prime location for their pavilion, the Australians also had the pleasure of being the only national pavilion to host President Hu Jintao on his inspection tour of the Expo site over the weekend. Presumably, Australian coal and iron ore will continue to flow unimpeded to Chinese shores.

Given the nature of the exposition, the exhibition facility has to denote, by its aesthetic distinctiveness, the country of origin, has to constitute, by the strength of its stylistic connotations, an evocative, recognizable and memorable cultural ideogram. In our design, the cultural idiom is primarily conveyed through the theme, the motif of folk-art paper cut-out. 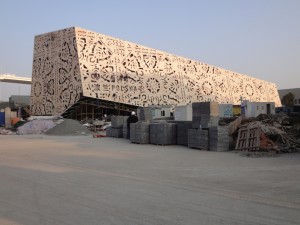 I think it succeeds spectacularly. A real gem, one of my favorites.

Across the way we find the Swiss pavilion. I show it with a bit of reluctance, if only because the current state of construction doesn’t provide a very good indication of the pavilion’s eventual appearance. So, I suggest clicking over to the official site, here, to place the image, below, in proper context. The completed pavilion is designed to invoke a “rural-urban interaction,” with the upper reaches serving as green space. So, again, I encourage taking a look at the official site. 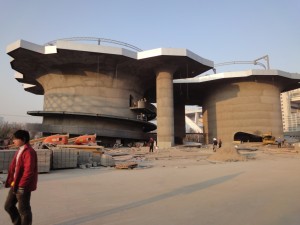 Nearby, we find the Danish pavilion. As construction sites go, this might be one of the most impressive. In the photo below, note how the structure totally dwarfs the photographer located in the foreground. It’s big and brutal (in the positive, Marcel Breuer sense). 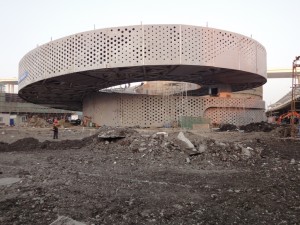 Based upon the artist renderings, I don’t think it’ll remain quite so brutal. But I must admit, I quite like the current state of it, with all those hard steel twists and turns, such as in the photo below. 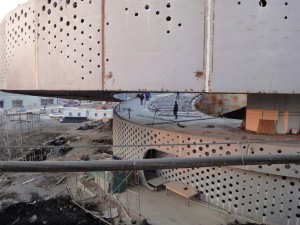 Finally, saving the best for last, we come to the Russian pavilion. I featured a photo of this structure in the first cavalcade, and I’m happy to add a few extras to this one. It’s an absolute stunner, a front-runner for my favorite. It’s worth having a look at the official site, where you can get a sense of the eventual, “faerie tale” structure. In short, it’s made up of a series of towers, each with a unique design cut-out at the upper levels. First, a complete view. 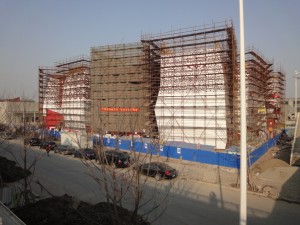 Next, one of the individual towers: 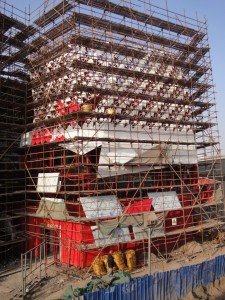 And last, a close-up of some of the cut-outs, with a worker to provide scale. When completed, the towers will be illuminated from within, and should be – will be – beautiful. 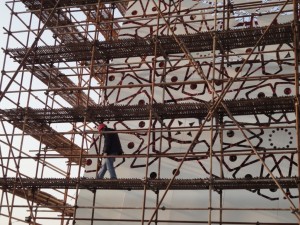 One more photo: Workers riding bicycles down the elevated Expo Boulevard (which runs the length of the site) at sunset. 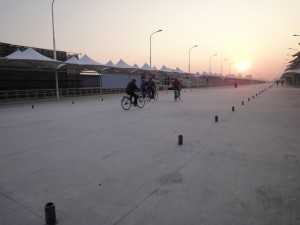