[UPDATE 1/8: The Red Plus Yellow blog has just posted a wonderfully useful item on how to winterize your Chinese apartment without replacing the windows. If you’re cold, you should read it. Great stuff.]

This morning I woke up shivering in my bed, too cold to go back to sleep, and logged onto my laptop to check the temperature: -1°C (30°F). By Shanghai standards, that’s cold. Back home in Minnesota, where temperatures were -17°C (0°F) when I went to bed last night, that’s positively balmy. But the funny thing is: I’m never cold when I’m indoors in Minnesota, but Shanghai, man, I associate it with wearing wool socks and stocking caps to bed. So what’s the deal?

First, and most obviously, most buildings in Minnesota have central heating, and central heating is far more effective at warming a space than the wall heaters and space heaters used in Shanghai. Second, while Minnesota’s buildings are insulated, and thus capable of retaining heat, Shanghai’s buildings are mostly uninsulated concrete boxes which – I swear – conduct cold like copper conducts electrons. But the third reason – and this is where the Miracle Cure comes into play – Shanghai’s buildings aren’t weather-proofed. That is to say, unlike in many if not most buildings in Minnesota, windows and doors in Shanghai have leaks that allow cold air to flow into heated (or unheated spaces). Take, for example, these windows in the sun room of my apartment (fyi: I’ve weather-proofed the door to the sun-room). They are similar to windows all over Shanghai: single-paned and – if you put your hand next to them – you can feel a cold breeze: 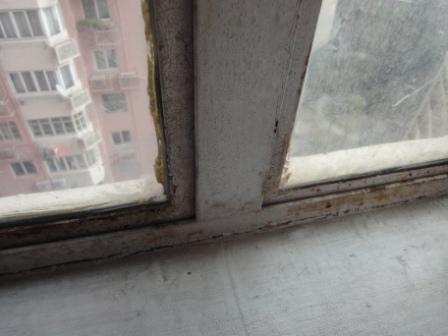 Before I weather-proofed (a few pieces of rubber sealant will do the trick) the door to the sun room (and, by extension, those windows), I had to run my heater two degrees warmer just to achieve the same rather cool effect in my bedroom.Now, with the thermostat turned down, I have reduced my carbon footprint in China (90% of China’s heating needs comes from coal – either directly, or through power plants) and – not insignificantly, reduced the load on China’s already stretched-thin electrical grid (according to today’s papers, China has begun rationing electricity in the face of a heating-related power surge).

A second photo – this one of the oft-commented upon  (by me) apartment building across the lane from mine. You’ll want to click it for an enlargement, and then take a close look for two things: first, how many/few of the windows are double-paned storm windows capable of keeping out the cold; and second, how many of the apartments have brand-new, city-sponsored air-conditioning boxes to cover up their unsightly air-conditioning units (and three, the apartment with steaks hanging from the clothesline)? 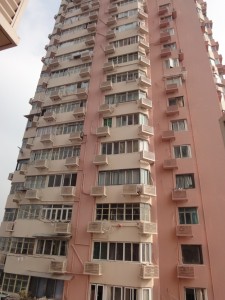 In answer to the first question: maybe 20%. In answer to the second question: 100%! Now, I’m well aware that the Shanghai government is keen to improve the city’s image in advance of Expo 2010, and I suppose a city-wide program to cover up unsightly a/c units is one way to do that. But imagine for a moment if the city were to turn around and announce that it was going to spend an amount equal to one a/c cover on weatherproofing for each Shanghai apartment that has … wait for it! … an a/c unit devoted to home heating. True, that wouldn’t be enough money to install storm windows in all of Shanghai’s high-rises. But I guarantee you this: it would be more than enough money to seal every leaky window and door in every high-rise in Shanghai.

And what would that accomplish?

In other words, we have here a reasonable and modest start on solving several of China’s most pressing issues: jobs, power, pollution, and face. That wasn’t so hard, was it?