The other afternoon I tweeted an image of a billboard promoting Shanghai’s Expo 2010 in New York’s Times Square. I was surprised (in a not good way) when I came across the sign, and if I hadn’t been completely occupied with my reasons for being in New York, I would have written slightly more than these 100 or so characters: “Expo 2010 Shanghai billboard in Times Square, NYC. Meanwhile, 99% of NYC editors never heard of Expo 2010 Shanghai.” 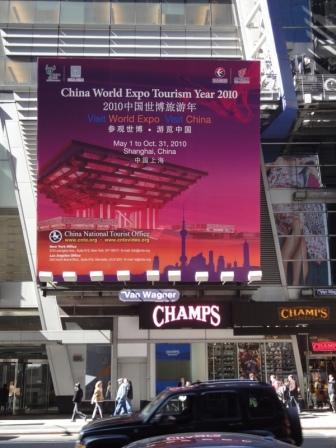 Believe it or not (you people who emailed about the tweet), I was actually trying to say something with that tweet: of the six New York magazine editors with whom I met last week, only one had ever heard of the Expo. Some of the blame for that ignorance falls squarely on Americans being Americans – we simply don’t take much interest in international events like Expos, World Cups, and UN Security Council meetings; but some of it, I think, falls on whoever the Expo organizers hired to promote their multi-billion dollar urban coming out party to Americans. Put differently, if you’ve never heard of the Expo, does that dour Times Square billboard make you want to learn more? Or as one friend in the US media emailed: “It looks like a billboard for a tourism industry expo focused on travel in your Golden Years.” That is to say – Shanghai isn’t going to attract much US media to Expo 2010 if this is the approach they’re committed to taking.

But I think the best commentary on the billboard and – intentionally or not – the lackluster effort to promote the Expo to Americans belongs to my friend Elaine Chow (Shanghai’s best English language blogger, no argument), who wrote on Shanghaiist:

Holy Christmas, is THAT what’s promoting our six month world-class event in New York City’s Time Square? Considering how much ad space costs there, you’d think the Expo promotion team would have spent a little extra money to make their ad look a little less like someone had to do a rush job in photoshop. At least pay for a decent font or something.

So what’s to be done? The other day, Expo historian Urso Chappell, commenting on Expo billboards in San Francisco, tweeted this simple solution: 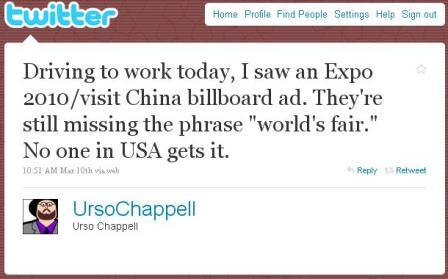 Urso is onto something here: most Americans have never heard of an Expo (the last one that we hosted went bankrupt). But we have heard of World’s Fairs, and though they sound archaic to our ears (two editors, when I mentioned that an Expo is a World’s Fair, exclaimed: “They still hold those things?”), they also sound kind of fun in a retro sort of way. So take Urso’s advice, Expo organizers, and re-brand it a World’s Fair for US audiences.

And since I’m in the advice-giving frame of mind (and still irritated that I couldn’t convince several editors that the Expo is worth covering), the Expo organizers really ought to fire the agency/”designers” who cooked up the Times Square billboard – the dullest billboard in all of Times Square – and immediately hire a young Shanghainese designer to do something bright, neon, and exciting – not unlike the signage that goes up on Shanghai streets every day. Americans like that kind of thing, and it’ll go a long way to ensuring that I’ll see more of my media friends in Shanghai this summer.