Today Foreign Policy publishes “A Sorry Spectacle,”  my history of the regrettable and often bizarre effort to build a USA pavilion for Expo 2010 [a/k/a, the World’s Fair] to begin on May 1, in Shanghai. Some of the material has been aired on Shanghai Scrap and elsewhere over the last year; much of it has not. The full FP story can be found here. 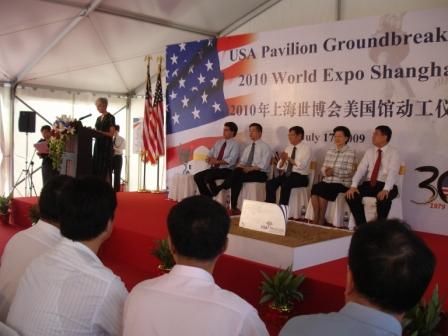 The USA pavilion saga is a difficult, murky story, and one that I haven’t always enjoyed reporting, to put it lightly. But, for the record, if my reporting has given anyone the impression that I’m somehow opposed to a US pavilion, I’d like to set the record straight. I’m very much for a quality USA pavilion, designed, selected, and built in a manner that displays the best of American architecture, design, and values. For reasons which I detail in the FP piece, I don’t believe that the 2010 US pavilion accomplishes that; rather, the design and machinations surrounding its selection, funding, and construction, have served to embarrass the US. Are we better having a poor pavilion than no pavilion at all? I suppose so, but that’s a sorry, sorry choice. Fortunately, I’m not alone in the opinion, and as a result there’s good reason to hope that – if the US decides to participate in Expo 2015 in Milan – things might be better. More on that another time.

In fact, as City Weekend recently noted, I’m a bit of an “Expo enthusiast” (their words, not mine, and I’ll link to it as soon as I can find the article online). Some of that enthusiasm, I think, comes through in the long feature that I did for the March issue of Delta Sky (the in-flight for Delta Airlines). I can’t link to it directly, but if you click here,  you’ll pull up the full March issue. Click over to page 76 for the Expo piece. And, it must be said: a hat tip to Sarah Elbert, Sky’s deputy editor, for recognizing – long, long, long before her fancy-pants counterparts at other US magazines – that Expo 2010 is a big story, deserving feature-length coverage.  And to my friends in the print media: Delta Sky is worth taking a look at … it’s not your parents’ in-flight, anymore, that’s for sure.

On another related note – last week, the terrific William Bostwick, an architecture and design writer for Fast Company (quoted in my FP piece), posted an interesting  slide-show of past US pavilions to his magazine’s site. You can find it here.

Finally, an acknowledgment. For almost a year, my Expo coverage has called for the State Department to respond to a Freedom of Information Act [FOIA] request, filed by a private citizen, seeking information related to the USA pavilion. The fact that State hadn’t responded, combined with a tight-lipped PR strategy (that occasionally veered into the outright duplicitous) by the USA pavilion group, only heightened suspicions as to what might be hidden in those documents.

Last week, the FOIA request was fulfilled, and – lo and behold – it didn’t contain much of interest, much less clear up any of the questions that still surround the US pavilion. But let’s look on the bright side: Jose Villarreal, the Commissioner General to the USA pavilion, appointed by Hillary Clinton last year, appears committed to bringing transparency to the USA pavilion, its operations, and its origins, even  (readers will note that he agreed to be interviewed for the FP piece). It’s worth nothing that he’s already brought considerable funding to the project and, in my opinion, order, whereas before there was mostly disarray. So here’s a hat-tip to Jose Villarreal’s commitment to transparency.

[UPDATE 9 March: I’ve had a few emails asking about the source of my claim that the State Department authorized Winslow and Eliasoph as private citizens, and then subsequently urged them to form a non-profit. Below, scans of the March 19, 2008, Letter of Intent authorizing Winslow and Eliasoph to develop the US pavilion [click to expand]. The third paragraph contains the relevant passage relating to the non-profit. 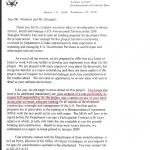 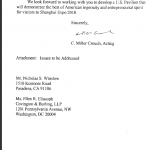