I was passing through the Jing’an Temple metro station late this afternoon when I came across a frenzy of young women crouched down and clawing at something – a something that turned out to be boxes and boxes of fake Swarovski jewelry (note: my camera served to scatter many of the customers). 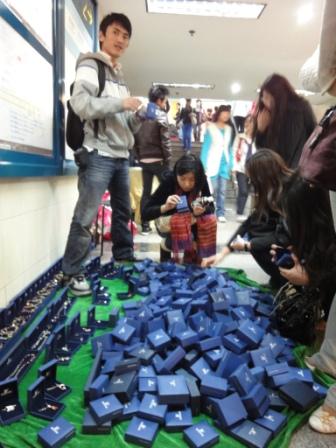 Nothing unusual in seeing fakes in Shanghai, or fake vendors in the subways. But I was a bit surprised to see them so active only weeks ahead of the Expo 2010 opening ceremonies. After all, Shanghai’s Pirate DVD stores, so far as I can tell, are still shuttered, or at least operating out back-doors or via internal rooms. So why the fake Swarovski salesmen are privileged over the city’s beloved purveyors of low-cost Jim Jarmusch DVD boxed sets (and other such things), remains a mystery. However, what’s perfectly clear is that Shanghai’s recent Expo-related case of IP religion (see here, here, and here) is roughly equal, in sincerity, to a hard kick in the shins. Case in point: Urso Chappell, the esteemed US-based Expo historian and founder of the Expo Museum, and the World’s Fair Podcast, tweets: