After a year of kvetching and moaning about the USA pavilion for Expo 2010 (World’s Fair), this afternoon Shanghai Scrap finally had the opportunity to go inside the nearly complete pavilion, and have a look at how – precisely – the US will be representing itself to China, and the world, beginning May 1. Regular readers will recall this recent post that included images of the pavilion’s exterior, designed by Canadian Clive Grout. With that post, I encouraged readers to compare the US design with those of other countries (such as those featured in this very nice Shanghaiist post by my friend Christine Tan). Alas, very few pavilions have opened their doors to the press (or anyone else) yet,  so, dear readers, you’ll have to evaluate them out of context.

I’m going to keep my comments to a minimum here. For now, my critique will be limited to saying that my prior assessment of the USA pavilion – that it looks like a movie theater – appears factual. That is to say, the USA pavilion is, in fact, a movie theater. Or, rather, a series of movie theaters. The films and videos that will be shown on these screens will constitute the pavilion’s programming. For various reasons (mostly, maintaining an element of surprise), the films weren’t shown to the media today. So, in some sense, it’s a bit unfair to judge the pavilion on the basis of its empty theaters. Then again, that’s what we have, so let’s get to it [all images enlarge with a click]. 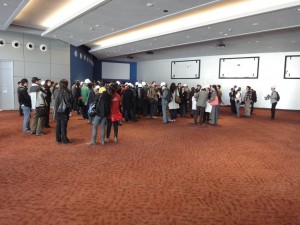 Above, the lobby of the pavilion (filled with media). On the far wall, the three large rectangles will hold screens showing a video in which Americans – celebrities (Kobe Bryant, for example) and regular folk (a Maine fisherman, we were told) – welcome visitors to the pavilion in Chinese.No doubt, visitors will note the donor walls that enclose them on two sides. In lieu of US government support for the US pavilion, private funds were necessary to pay for the $61 million US pavilion. Thus, prominent play in the lobby – and elsewhere – for the donors. 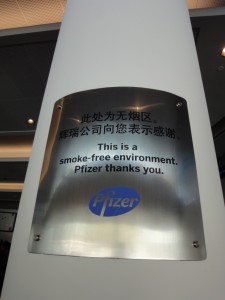 [UPDATE: Based upon a phone conversation, a few of the comments below, and several emails, I think I may have left the impression that I’m opposed to corporate recognition in the pavilion. I’m not. I think it’s appropriate and warranted. What I don’t like to see is a recognition opportunity turning into a promotional opportunity. It’s fuzzy line, I know, but I think we all know it when we see it. Hopefully, the sponsoring companies, and the pavilion authorities, do, too.]

From the lobby, visitors will be ushered into the first of the pavilion’s theaters for “Act 1: The Spirit of America.” According to materials distributed to the press: “Across three large screens … Americans remind guests of the power of imagination and collaboration.” Below, the three screens. 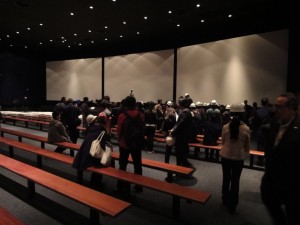 Then, from here, visitors will be moved into the next movie theater, where they’ll watch an eight minute film, Act 2, “The Garden.” Again, according to the materials distributed to the press:

In this moving urban fairy tale, a little girl with imagination and resolve moves her neighborhood to reinvent itself. Looking out at an abandoned vacant lot, the girl envisions a flourishing garden. Her passion and determination inspire her neighbors … [A]t the end, a city that was once tired and gray becomes a magical vision of what can happen when optimism, innovation and collaboration come together.

The film is projected upon five screens, depicted below, and will be accompanied by 4-D effects (wind, rain, seats that shake). 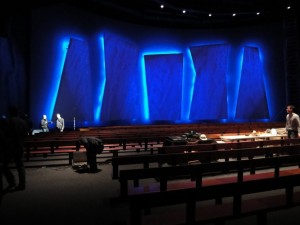 The final act wasn’t included in the press tour or the press packet, but it was included in an off-site press event on Tuesday, and is mentioned on the pavilion website:

The fourth show is a walk-through exhibit experience to present how Americans are taking practical steps to make “Better City, Better Life” a reality. It will showcase five thematic pillars: Sustainability, Health & Nutrition, Technology, Lifestyle, and Discover America. It will provide a unique opportunity for our guest to experience first-hand how the vision of the future will come to be. Pavilion partners will showcase technologies and ideas that are helping them achieve their goal of “Better City, Better Life”.

What does this mean? According to two reporters who attended yesterday’s briefing, it’s an opportunity for the pavilion’s corporate sponsors to feature themselves, and some of their products – or, at least, their corporate images – to visitors departing “The Garden.”

Again, in fairness, the films weren’t shown. Perhaps they would’ve made a strong impression. Perhaps not. In any event, like several of my colleagues, I left underwhelmed. Rather than experience a USA pavilion that exhibits American ingenuity, creativity, and accomplishment, I saw a pavilion that represents an America that spends too much time watching TV. In that sense, it’s no surprise that visitors will finish their double-theater movie-going experience by exiting via an exhibition hall that serves – for all intents and purposes – as a word from our sponsors.

If you’re at all interested in how the US ended up exhibiting this particular face at the premier public diplomacy opportunity of 2010, you can find a summation of my theories, here, or take a look at some of the source documents, here.

And when you’re done with those, I hope you’ll leave a comment or two for the USA pavilion and State Department officials (often, one and the same) and employees who follow this blog (discussed with several of them in recent days). Over the last year I’ve been highly critical of many of them  – deservedly so, too – but it’s also the case that State has many good people who’d like to do better next time (if there is a next time) – among them, Commissioner General Villarreal, a gentleman. So let’s hear it. What do you think? Is this how you want the US represented? Or, if you’re not a US citizen, does this make any difference in how you view the US? Comments are officially RE-opened.