In a fleeting respite from Expo blogging … allow me to join a growing rank of folks eager to tell you that – if you are in Shanghai before July 25 – you absolutely must attend Cai Guo-Qiang: Peasant Da Vincis, the inaugural exhibit at the exquisite new Rockbund Art Museum. The exhibition is curated by Cai Guo-Qiang, the highly regarded Chinese artist who, over the last several years, has taken an intense interest in the ambitious inventions of Chinese peasants, including helicopters, submarines, and robots. Below, a submarine by Li Yuming, hanging in one of the galleries. 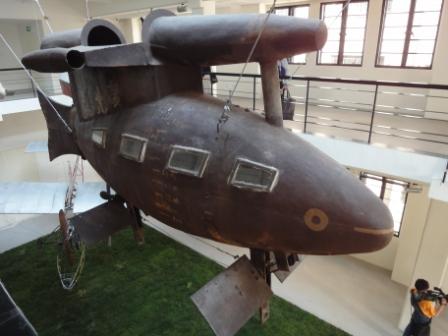 The transit-oriented inventions are terrifically fun and interesting, but I have to say that I most enjoyed the robots commissioned by Cai, and built by inventor Wu Yulu, that invoke the work and methods of well-known Western artists. So, for example, below we have a robot that drags a female mannequin through colored sand, in tribute to Yves Klein and his “living brushes” (basically, nude women covered in paint whom he directed across canvases). 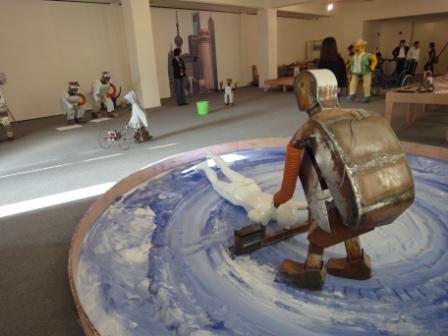 In his remarks to media in advance of the opening on Monday, Cai pointed to these inventions, and their inventors, as a rare example of individual achievement in a culture (in his interpretation) that rarely values it. To me, they seem like a poignant repudiation of those who doubt whether China can, or ever will, innovate (a favorite and regular conversation at the American Chamber of Commerce, believe me). Under the most difficult of circumstances, these inventions seem to say, ambitious Chinese (peasants) find a way. I’ll have more to say about this show in the very near future. But, for now: go.