The superlatives attached to Expo 2010 – the Shanghai World’s Fair – are various and numerous: it is the biggest Expo site, with the most countries participating, and – guaranteed – the best attendance, in the history of the Expo movement. Less discussed, but just as notable, is the fact that Expo 2010 is the most secure Expo in history, as well. Or, at a minimum, it sure looks secure: fences and soldiers surround the site, attendees are required to subject themselves to metal detectors and their bags to x-rays. The situation is often so heavy-handed that staff at several pavilions have taken to calling this Expo, the Gulag Expo (riffing, of course, on Aleksandr Solzhenitsyn’s Gulag Archipelago).

So it came as no small surprise to me when, last night, while I was strolling through the busiest part of the Expo (in front of the Spanish pavilion), I came across a tout selling counterfeit Expo 2010 key chains and other knick-knacks to enthusiastic Expo attendees. 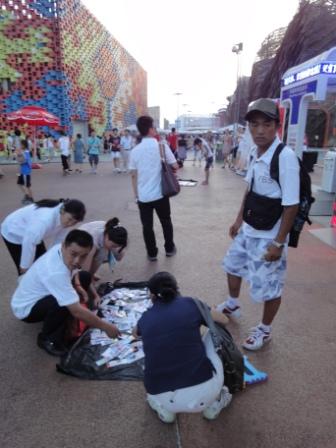 Allow me to put this in perspective: three touts selling counterfeit Expo goods at Expo is akin to  three touts selling counterfeit Mickey Mouse key-chains in the heart of Disney World – a Disney World rung by fences and guarded by thousands of national guard members, police, and private security guards. And I’m not the only blogger to notice this phenomenon: DeluxZilla, apparently, had it ten days ago. He suggests that the touts are getting the goods into the park by having accomplices toss them over fences. I suppose that’s a possibility. But I think the more likely explanation is that somebody – I don’t know who – has good reason (I’m putting this delicately) to ignore the situation.

In any case, let this serve as a new datapoint in the ongoing discussion of whether China can, or even wants to, enforce intellectual property laws. After all, if not at Expo, where?