As regular readers may know, over the years I’ve spent a significant number of non-blogging hours investigating and reporting on the Chinese e-waste trade for trade and mainstream publications. For those who are not regular readers, e-waste can be broadly defined as waste computers, monitors, cell phones and other broken, obsolete, and unwanted artifacts from the information economy. Though safe when they’re on our desktops or in our hands, the means used to dispose of and/or recycle theses devices in China and other developing countries are not safe at all, but are rather dangerous to human health and the environment. For most of the last thirty years, developed countries have been the major sources of this material; but in the last five years, as China became the world’s second largest consumer of PCs and other electronic devices, the flood of domestically generated Chinese e-waste has overtaken what was once imported in large quantities, and begun to pose a considerable environmental risk.

This phenomenon has not gone unnoticed, both among China’s environmental officials, and among its private-sector recyclers. Over the last three years, in particular, both groups have been looking for solutions (economical ones that can compete with the environmentally ruinous methods of e-waste processing used in South China), and – reportedly – several very good pilot e-waste programs are running in China. Unfortunately, the companies and government units running these e-waste programs have not been willing to open them up to outside eyes (or, open them up for on-record review to journalists). And this is a pity for a number of reasons, not least of which is the fact that – so long as environmentally-sound e-waste recycling remains a secret in China – the environmentally un-sound methods will be the ones that are reported abroad, much to the detriment of the entire Chinese recycling industry. 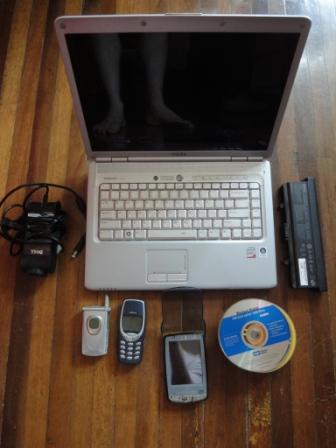 Now, as it happens, I’ve been trying to get into some of these environmentally-sound e-waste processing centers for 18 months, now, but without success. So today I’m going to take a different approach. Above is a photo of the e-waste that I currently store in my Shanghai apartment. It includes: an old Dell laptop (worst computer I’ve ever owned), the Dell battery, the Dell powerpack; a Samsung mobile phone; a Nokia mobile phone; an old HP Ipaq; and a stack of old software CDs. I would like to see all of these items recycled in an environmentally sound manner, in China, and I am prepared to travel to do it. If you are a Chinese company capable of recycling any or all of these items in a manner that meets the standards of Chinese law, then I would like to write about you. Contact me here.

Here’s what I offer in return:

Here what I expect in return:

My background as a reporter on these issues can be found here, and global recycling, in general, can be found here. If you have any questions about this Challenge, or would like to participate in it, you can reach me via this Contact Form.

And finally, a note to readers: despite the fact that I write this blog for free, I have never accepted payment or other compensation in exchange for posting information to Shanghai Scrap. Likewise, I have never before offered to allow an entity editorial control over a post on this blog (however, in a couple of cases I’ve submitted a blog post for fact-checking, only). In the case of this post, and whatever comes of it, I’ve chosen to offer my expenses and an editorial veto, due to two factors.