A brief list of commodities of which China is a net importer: oil, iron ore, soy beans, wheat, corn, aluminum scrap metal, copper scrap metal, steel scrap metal, recyclable paper stock. That is to say, China lacks sufficient domestic supplies of these resources, and must resort to other countries for supply. Among the leading suppliers of food commodities and scrap metals (which comprise a significant percentage of China’s total production of aluminum and copper and, to a lesser but still important extent, steel) is the United States. Indeed, as China’s economy grows, it’s dependence upon the United States and other exporters for commodities, especially for food and metal (and ores) increases. Below, a chart from the United States Department of Agriculture’s Shanghai Trade office. 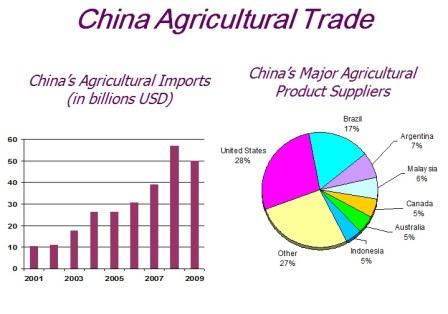 Quite often, and understandably, my friends in the China-focused media and academic class tend to lose themselves in the same story and theme. For years, for example, the China-focused media has been tightly focused on the Chinese export story, while giving short shrift to the still considerable volume of exports – especially the commodities that power the Chinese export machine – that the United States and other developed countries send to China. To be sure, the trade deficit between China and the United States grows, but US to China trade also grows, and it’s worth remembering – if the stories about American job losses often don’t – that China is the third largest US export market. And it’s also worth remembering that commodities – agricultural and recyclable – are the two leading US exports to China, by volume.

Which brings me to the recent intimations of a ban on the rare earth elements so crucial to the manufacture of (ahem) ipods, disk drives, catalytic converters, wind turbines and the navigation systems of Abrams tanks – all items, we are told, essential to the function of modern life. One can’t underestimate the importance of rare earths.

At the same time, I can’t underestimate the importance of low-cost soy beans and wheat to social stability in China; and the almost equally significant importance of low-cost American scrap metal to low-rung manufacturers and their millions of employees in Zhejiang and Guangdong  provinces. Frankly, I bet that, if you gave the leadership of the CPC a choice about what they’d prefer to have in export-level abundance – soy beans or a rare earth like neodymium ore –  they’d choose the former. But you don’t get what you always want, and China – like so many developing countries – finds itself lacking in what it most wants and needs, and overflowing in what won’t do it much good without the help of foreign manufacturers and their overseas markets (though, to be sure, China’s domestic tech markets are expanding wildly). Sure, China might be the Saudi Arabia of rare earth elements, but unlike Saudi Arabia, enriched by oil, China’s rare earth barons barely make a blip on the country’s GDP or export figures. Once the media moves onto another story, nobody outside of the occasional alloy aficionado will ever think of China as the “rare earth state.”

Six years ago, in the midst of a global commodities boom that raised prices on scrap metals across the globe, US-based consumers of scrap steel formed a coalition to press for a total export ban on the material (2/3 of US steel production is scrap based). They were soon followed, in their complaints, by US-based consumers of other scrap metals. In both cases, the bogeyman was China: if not for its protectionist economy, the argument was made, American scrap consumers would be able to buy their material at “normal” prices. In fact, there was almost zero chance that the free trade-oriented Bush administration would slap an expo ban on scrap. But that didn’t stop Chinese importers of the material, and their trade associations, from going into full-tilt panic mode at the prospect of restricted trade in a raw material key to China’s growth and employment picture. I personally witnessed the panic and hyperbole, as well as the relief when the proposals were set aside. In fact, just this April I was in a room when a Chinese trade official thanked a US person involved in that incident for his help in defeating the proposed ban – and that was six years on! For all of the posturing by Chinese policymakers, the truth is that China’s growth story is highly, unambiguously, dependent upon commodity exports from abroad, and there isn’t a Beijing bureaucrat worth his salt who doesn’t know it.

Now, whatever China is trying to accomplish with a rare earth ban (and that’s assuming there is, in fact, a ban), it can’t be lost on economic policy-makers in Beijing that a retaliatory export ban (however unlikely) on something like – I dunno – soybeans or aluminum scrap, would have a far more profound and immediate impact upon the Chinese economy than this alleged rare earth ban (a ban that can be circumvented by packing a suitcase with rare earth powders sufficient to run relevant manufacturing facilities for years) will have on the US. Now, I’m neither advocating such bans, nor do I think them wise. But, fact is, there are new calls for a scrap metal export ban in Washington, D.C., and the rare earth export ban guarantees that ears will be more open to a ban this year, than they were in 2004. Way to go.