Below, a photo of a metal sorter in Jiangsu Province, China. To those who don’t recognize what she’s doing, it may look like she’s sorting garbage. To those who do, they know that she’s a semi-skilled laborer who can distinguish different types of metal by sight and feel. That job description doesn’t generate much respect in China, or outside of it. Eight years ago, when I first started encountering workers like her, she was paid like it: between RMB 600 and RMB 800 per month (US$73 to US$97 by the 2002 fixed exchange rate). She was also younger: most of the hundreds of thousands if not millions of women engaged in this type of metal sorting were under the age of 30, unmarried, uneducated, and relatively local to the factories where they worked. 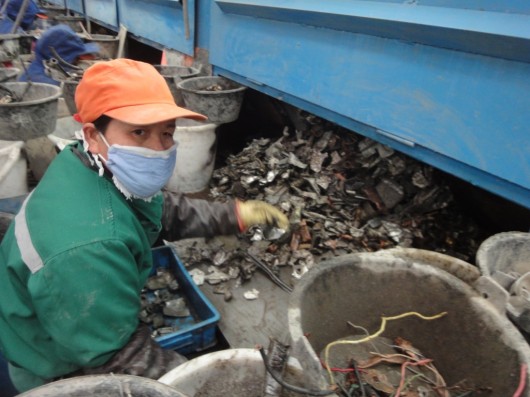 Over the last several weeks I have been having a new, intense encounter with these metal sorters, and much has changed. The factories where they worked, once filled with the happy gossip of younger women, are now quiet, the sole territory of women in their late thirties and older, many of whom have remained single. Young women, the sorts who, ten years ago, would have flocked to these factories, are now migrating to the cities in hope of better jobs, and better lives. And so, in the absence of new laborers to bolster their ranks, China’s semi-skilled metal sorters have become highly sought. Wages, once so low that they could only be justified as decent in comparison to a farmer’s i ncome, have risen to levels that – ten years ago – none of these women could expect. In this factory, wages have risen by 20%, annually, for the last couple of years, and now average in excess of RMB 3000/month (US$441/month) – exceeding what most Chinese college graduates can reasonably expect to earn after graduation.

It won’t last, though. The employers of China’s metal sorters, panicked at high wages, are investing in efficiency and automation designed to eliminate RMB 3000/month metal sorters. In a few years, there’ll be fewer Chinese metal sorting jobs, and – presumably – lower wages in the field. At least, that’s how it looks right now. Then again, eight years ago nobody was predicting the current bottleneck – everyone just assumed that there’d be plenty of cheap labor flowing from the countryside, into scrap yards, for years to come. I won’t hazard a guess as to where all of this is going. But it sure doesn’t feel stable – it sure isn’t the China that metal industry leaders told me I’d be watching in 2010. It feels much more unstable.