A couple of weeks before Christmas, American apparel icon the Gap took it in the PR pants when it was revealed that some of its ‘Made in USA’ bags were actually manufactured in China. Personally, I didn’t and don’t share the outrage that led 75% of the respondents to a Huffington Post flash poll to declare that they wouldn’t buy the bags as a result of this oversight/act-of-hypocrisy. It is, after all, just a bag (albeit one being sold as a charitable fundraiser), and though Gap has a long history of overseas labor controversies, its most recent problems have been in countries other than China.

But anyway. Just before leaving Shanghai for the holidays, I made my second trip to China’s first Gap outlet (account of first visit, here) – this time, in search of a gift for a teenage cousin in the USA. I found it quickly, paid, and left the store with a signature blue Gap bag branded with the company’s Chinese home on the web: www.gap.cn. 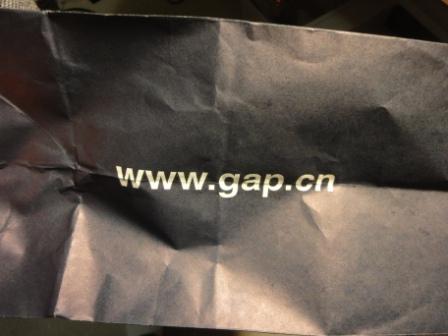 The following week, in the US, as I unpacked the sweatshirt from the bag, I happened to notice – on the bottom of the bag – this: 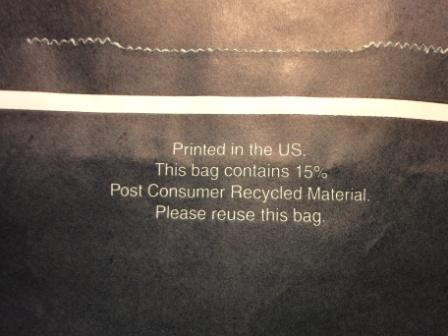 Now, unlike the Made in USA bag, this bag contains no misrepresentations. But I think if I’m a shareholder in Gap, this bag bothers me more than the other, mostly because China is home to the world’s second largest paper industry and yet – for reasons known only to Gap’s management – the company is exporting paper bags to China, from the higher-cost US. That’s bad enough. But what’s worse, what’s really, really dumb, is that the green window dressing (“Please reuse this bag.”) is written in English. Not Chinese. In other words: Gap chose the most expensive, and least effective option for its shopping bags. And that, dear readers, is a pretty fair metaphor for how this troubled US company has handled its Chinese market entry, in general.