[23 Feb: Multiple updates to be found at the end of the post!]

Late last week the Chinese media started reporting rumors that Best Buy, North America’s dominant electronics retailer, was planning to shut down its branded stores in China. Rumors like that don’t start from nothing – the company’s stores have been empty for years, and rumors have circulated about all kinds of management problems. Still, that didn’t prevent the company from formally denying the closure rumors yesterday … and then shutting them down today, Tuesday. An image of Best Buy’s flagship store, shut down and locked up, around 4:00 this afternoon. 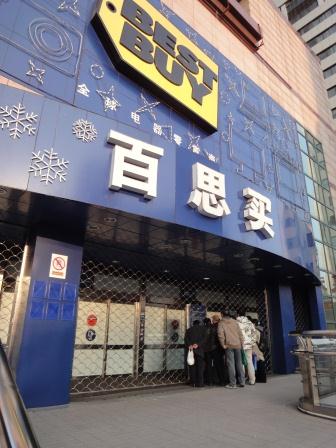 So what went wrong?

Late in 2007, just as Best Buy was getting ready to roll out its first branded store in China, I sat down with Bob Willett, then the CEO  of Best Buy International (he’s since retired), in a cubicle at the company’s HQ south of Minneapolis. It’s funny: four years ago seems like ancient history in China terms, but even then there was a strong sense – at least at Best Buy – that they were late to the China market, and had much catching up to do. When I asked Willett why Best Buy was entering the China market at that late date, his answer was concise: “China’s going to be the biggest economy, or second, and it would be just unbelievable if we’re not there (the article for which the interview was conducted can be found here).”  Note that Willett didn’t say that there’s a market opportunity in Shanghai, just that it would be “unbelievable” if they weren’t there. In the two years running-up to the launch of the brand in China, the company would hire a consultant (dunnhumby, whose website claims: “we put genius into making sure that our people and our clients get to know and treat their essential customers better than anyone else.”) to tell them what they wanted to hear: that there was consumer demand for Best Buy in China. But the decision to move in was much more seat-of-the-pants, and had little to do with any pent-up demand in the market. 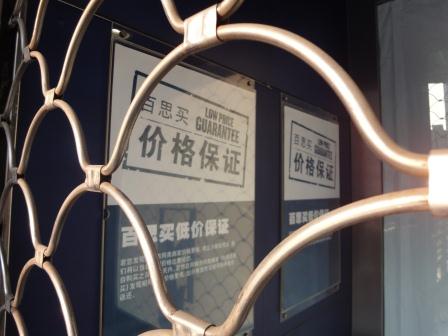 The second thing that jumped out of the four-year-old transcript came in response to my question about how Best Buy would differentiate itself in an already crowded, highly-competitive and extremely price sensitive Chinese retail electronics marketplace. Willett, like several other Best Buy executives involved in the company’s China venture, patiently, and a bit condescendingly, told me that some Chinese consumers were willing to overlook price in favor of service, and that – all things considered – Best Buy was going to distinguish itself on service:

“We’ve become a service company in North America, and that’s what we’re doing in China, too. Generally, though, you don’t have a lot of natural homegrown talent in China that knows how to do it. So we’ve had to create it ourselves.”

Now just pause for a moment to take that in and parse it: Best Buy didn’t enter China intending to hire talent that knew how to be successful in China. Rather, it entered China intending to create talent that knew how to be successful in North America. That might work very well in Canada, where the retail culture is decidedly service-oriented, but it was going to be a hard, hard road in China where – even Best Buy’s internal studies showed – price was still king for most consumers. 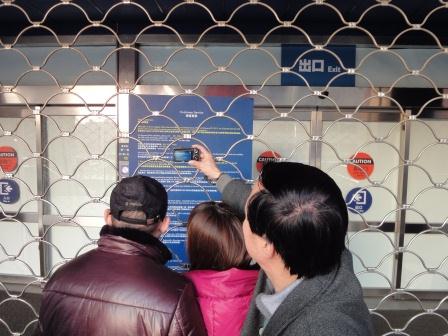 They would self-inflict this lesson upon themselves by locating the flagship store within two blocks of a Gome and a Suning (China’s two biggest electronics retailers), both of whom – in image, if not reality  – were able to undercut Best Buy’s prices significantly. But here’s the insult that makes it even worse: before opening in Shanghai, Best Buy’s management told me, over and over, that “our market studies show Chinese consumers like to try out products,” and that Best Buy’s interactive displays would take advantage of that predilection, put the company over the top in Shanghai. Lo and behold, it was kind of true: Shanghai’s shoppers would go to Best Buy to try out products – and then promptly march across the street to one of the other Chinese retailers and buy them for less (in stores with much deeper production selection, no less). And here’s where the Best Buy model truly failed: in North America the company has no major competitors, and even if it did, customers would have to drive to find them – because the store outlets are typically located in suburbs, surrounded by giant parking lots . In China, however, the company located its stores in urban environments where customers could walk to the competition and did. In that environment, no amount of service is going to help a company compete: you’ve got to win on price.

In any case, only Best Buy has the research to show why its Chinese stores massively failed. But as someone who lived (past tense, Adam, past tense) near the flagship store, and who walked through it on occasion, I think the answer is two-fold: the prices were too high, and the service was not much better, and often significantly worse, than what you’d get at other retailers. To be sure, when the flagship opened, the service standard was outstanding, but in no small part due to the fact the company had been training some of the employees for more than a year. But as it expanded in Shanghai, that initial talent was diluted, resources for training could never match those expended on people hired at the flagship store, and – most important – the available talent pool in China’s big cities simply wasn’t going to make a career out of working at a Best Buy. So, in my case at least, that translated into witnessing Best Buy employees playing grab ass on the sales floor and, in another notable instance, being offered a stolen iPhone in the middle of Best Buy’s mobile phone display section. Could Best Buy have afforded to train longer, and hire better? I have no idea, but as a self-proclaimed service company, one would think that they would have asked that question before entering China. Alas, that’s not how Willett and the other geniuses  who cooked up this China entry plan were thinking. Rather, like most of the failed China strategies I’ve seen, the failure stemmed from one problem above all others: the foreigners were convinced they knew better than the local market. Turns out, they didn’t know anything.

[Addendum: A special note regarding Redmond Yeung, who served as COO of Best Buy China for years. He jumped ship last year, and is now running – and botching – Gap’s entry into the China market. Nice job of failing upward, sir. Below, a photo taken at the flagship store’s grand opening: left to right, Yeung, with former Minnesota Governor, and likely GOP presidential candidate Tim Pawlenty, and Lu Weimen, the Chinese national who ran the company before Yeung replaced him. I could be wrong, but I’m all but certain that he’s the only Chinese national to have had a senior leadership role in this debacle. 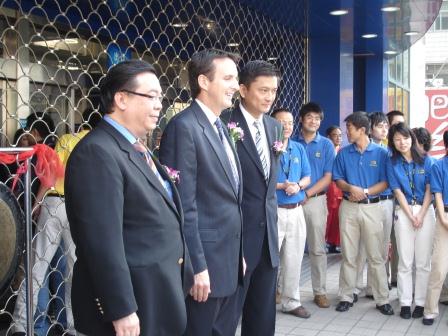 [Addendum II: In response to a couple of emails, let me note that I would have loved it if Best Buy had succeeded in China. In part, out of Minnesota pride (I’m a native, and still consider it home) but also because I liked being able to shop for electronics in China without having to bargain, worry about buying fakes, or not being able to return items. The laptop upon which I’m writing, right now, was purchased there, as was the printer to my right, the speakers in front of me, and the iPod in my gym bag. I’m as sorry, and as irritated, as anybody that this happened.]

[Addendum III: A few folks have pointed out to me that I’m only focusing on the negative in Best Buy’s closure of its branded outlets, and not the positive. Namely this positive: the company has closed the branded outlets in order “to focus on expanding the more profitable domestic chain it acquired five years ago.” It’s true: Best Buy owns 70% of Jiangsu Five Star, a low-end consumer electronics retailer based in Nanjing. But you would have to be particularly susceptible to corporate spin if you believed that the millions of dollars in charges that Best Buy is taking over the closure of the branded stores, in some of Shanghai’s most prominent retail locations, is anything but a massive strategic and financial failure. Jiangsu Five Star was acquired to help Best Buy learn the market, and provide it with a lower-end retailer that it could use to springboard wealthier consumers into higher-end Best Buy. Needless to say, Best Buy learned little to nothing from Jiangsu Five Star, and it has just conceded the high-end of the Chinese consumer electronics market to others. Perhaps they can turn this disaster into something positive, and make Five Star a solid competitor to market leaders Gome and Suning. But, considering how badly Best Buy just screwed up its branded stores, there’s little assurance that they can. Or, put differently, how do you think the old management of Five Star – the ones who still hold 30% equity – are going to react when the suits from the US show up and tell them, “We’re going to start focusing on customer service.” Don’t be fooled by the spin. [Correction: Calvin Chin comments, below, that Best Buy bought the remaining stake in Five Star in 2009. Apologies for the error!]]

[Addendum IV: This is too much. In the official company press release, Best Buy calls its shuttered Chinese stores: “Best Buy-branded test stores.” [italicization mine] This sort of ass-covering is typical of the PR profession, I know, especially when practiced in service of multinational companies that reimburse for business class. But it’s particularly shameless in a case such as this one, where the so-called test stores cost the company tens if not hundreds of millions of dollars, and priceless prestige in the China market. Apparently, accountability isn’t something that’s being stressed around the Best Buy offices these days.]