During the four years that I’ve kept this blog, I’ve been reluctant to offer too many insights into my life away from my laptop. This is for many reasons, not least of which I’m pretty sure that the folks who come here for the China blogging don’t come here for, say, blogging about what podcast I might’ve listened to on the flight to Guangzhou. But, you know, one of the great surprises of blogging and tweeting – for me at least – are the friendships, the relationships, that I’ve developed with readers. I can really say, looking back, that my life away from the laptop was enhanced, considerably, by this platform. Who would’ve guessed?

My grandmother, Betty Zeman, never quite understood blogging, or twitter, for that matter. But that’s just a matter of timing: if she’d been born a few decades later, she would’ve been a social networking maven, if ever there was one. She was just that kind of lady.

Betty died on Wednesday morning, age 89. I really miss her, and so do the many friends of mine who got to know her over the years. It came down to this: you couldn’t hang out with me in Minnesota, without hanging out with Betty. And nobody ever seemed to mind. She was – and she’d approve of these phrases – a tremendous piece of work, a character of the first-rate variety.

Betty’s life didn’t take her far from Minnesota. In her late teens she had a spell in Hollywood, working as a personal aide to an actress at a Hollywood hotel for retired, destitute silent movie stars (oh yes she did), and in retirement she spent time in Palm Springs during the winters. The lack of travel didn’t bother her much – not usually, at least – because, I think, she wanted nothing more than to be close to her family. But once in awhile, I’d sense something different in her, the wanderlust in me that I suppose must’ve come from her.

On Thursday I gave the eulogy at her funeral. That was hard. Hard to write, even harder to speak. I did it, though, until the last two paragraphs. Those concerned what she expected of me, what she wanted of me during the difficult conversations before I’d board a plane and leave her, and Minnesota, once again. I wasn’t sure I’d get through them, so I asked my cousin, and Betty’s nephew, Earl Schwartz, to deliver them for me. It was a wise choice: Earl, a much loved faculty member at Hamline University, read them better than I ever could.

I’d like to share those paragraphs with my readers because they embody the person, and the philosophy, that influences this blog and my writing more than any other. But also because, over the years, I’ve had so many conversations with other long-term expats about the difficulty of being away from family while embracing life abroad. Betty told me how to handle that problem; I suggest taking her advice, in this and all other things:

So what to do now? How do you say good-bye to someone so protective, so loving. Over the years, for better or worse, I’ve had some practice in answering that question, going back and forth between Minnesota and Shanghai, Shanghai and Palm Springs, two, three, and four times per year. Recently, as that became harder, and her health began to fail, she could see that I was struggling with the departures. And she had no patience for it. ‘You’ve got to go,’ she’d say. ‘You’ve got to live your life.’ I heard that so many times, and I never doubted that she meant it as an order. So that’s what I did.

Here’s the other thing. Betty had a hard life, but life was also such a joy for her, filled with people to meet, gossip to share, samples to try in the freezer aisle. Once, it was probably a Sunday night, I called her from the road, somewhere in Asia, feeling homesick. ‘Enjoy it,’ she said, lustily, with an edge that reminded me that she would, if she could. ‘Enjoy it.’ I’ve tried to remember those two words over the years, and especially the way she said them, like an order. Enjoy it. So today I’m doubling down, remembering to enjoy it. And believe me, if I don’t – if we don’t, she’ll turn those clear blue eyes in our direction, and say something – well, if not tactless, tough enough to remind us that she’d be enjoying it if she could, so we’d better get on with it. ‘You’ve got to live your life,’ she liked to say. ‘You’ve got to do.’ 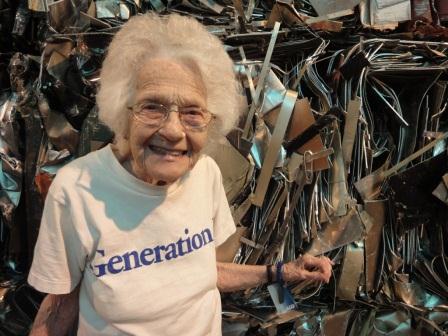